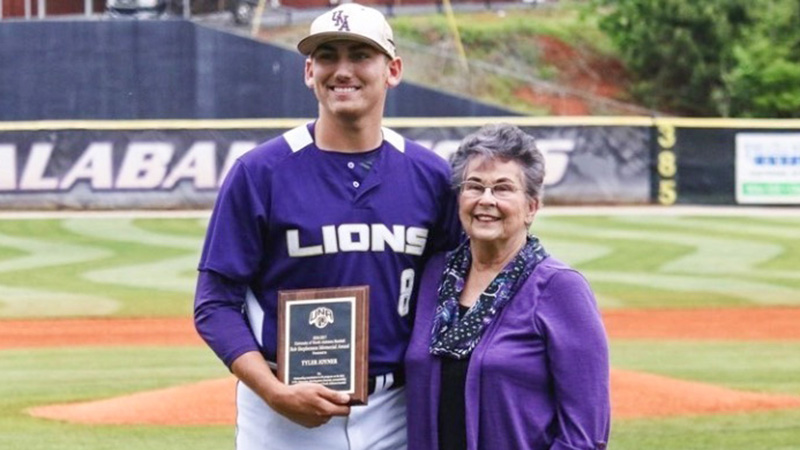 Photo by Bekah Benson Tyler Joyner receives the Bob Stephenson Award from Rosalie Stephenson prior to the North Alabama’s game versus Christian Brothers on Monday. The award is voted on by teammates and coaches.

University of North Alabama junior pitcher and East Brewton native Tyler Joyner was selected by his teammates and coaches as the 2017 Bob Stephenson Award winner on Monday.

The award was created in 2013 and is presented to a player on the team “who has contributed to the program on the field and in the classroom, shows great character, accountability and loyalty to the UNA baseball program.”

Joyner received the award from Rosalie Stephenson, the widow of the late Bob Stephenson.

Joyner is having a career season, leading the Lions with a 11-1 record, 3.06 ERA, and 89 strikeouts in 88.1 innings pitched. He has recorded four double-digit strikeout games.

In the classroom Joyner holds a 3.81 grade point average.

He is a 2014 graduate of W.S. Neal High School and 2016 graduate of Coastal Alabama in Brewton.