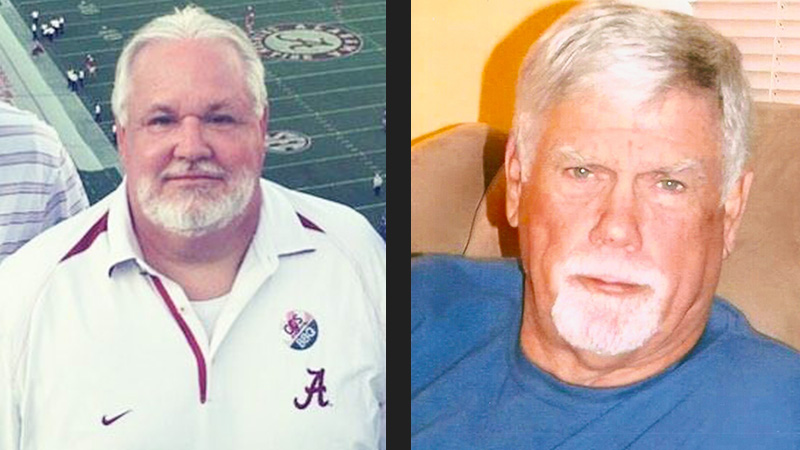 On a sunny day at Miller-Kruse Field last Friday, the stadium felt emptier, and darker, because the team was without one of its biggest supporters.

Sixty miles away at Sacred Heart Hospital in Pensacola, Fla., Phillip Carl Etheridge took his final breath at the age of 58 following complications from cancer. He was surrounded by the love of his family.

Four days after his passing, those who were some how touched by his spirit joined his family at Brewton’s First Baptist Church in celebration of a life gone far too soon.

Etheridge always found a way to be involved with his family and the church at First Baptist. He volunteered as a cook and coached pee wee football to name a few.

He stayed busy supporting his children at athletic events. His daughter Erin served as co-captain of the color guard her senior year at T.R. Miller. To experience her senior year he drove the band bus. His eldest sons, Nick and Tyler, played football for the Tigers. One could pick out Etheridge’s boisterous cheers and the occasional sound of an air horn.

Dylan was the first son to decide to go a different route and join the marching band.

“I kept that away from my dad for awhile. I wasn’t sure what he would say,” Dylan joked. “He supported my decision and rooted me on from the stands like I was playing football.”

His youngest, Andrew, also joined the band. His senior year he played bass drum and served as percussion co-captain. He is a pitcher on the T.R. Miller baseball team.

As friends immortalized Etheridge’s love for TRM athletics, Alabama football, cooking and God’s divinity, it was his fourth child, Dylan, who summed up his father’s love for his family.

“He challenged us to be our best,” Dylan said. “It wasn’t until recently I found out from our mom the number of jobs he took growing up so he could be his best self to support us. He just wanted the best for all of us.”

Andrew will join his teammates in Gordo Friday as the baseball team continues its pursuit of a state title. As Miller takes the field, the late Etheridge will perhaps have the best seat in the house that evening, as one of the “angels in the outfield.”

He is preceded in death by his parents, Guy Hartwell Sawyer, and Willie Earl Sawyer of Frisco City.