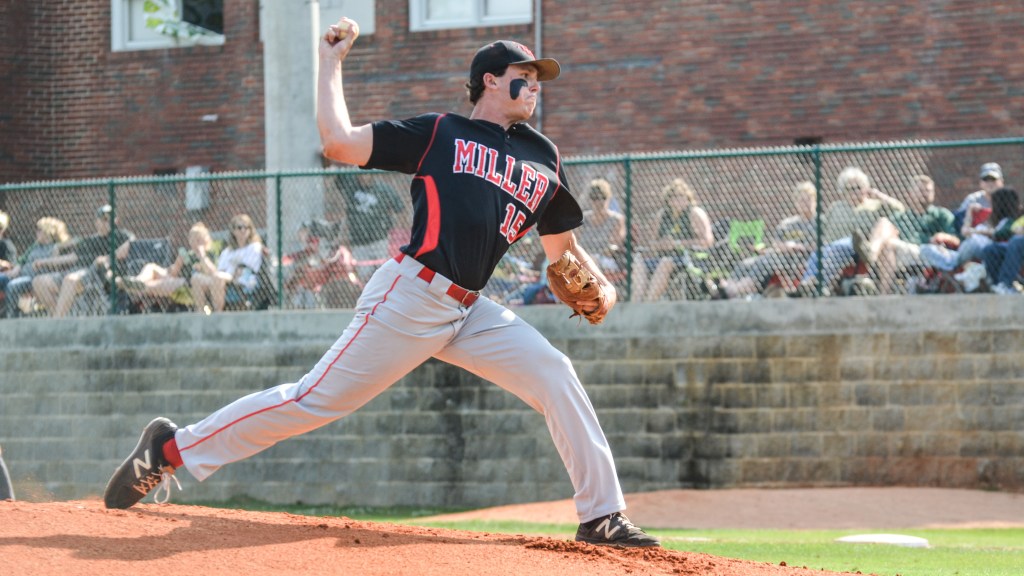 High stacks, high intensity, and a back-and-forth battle. Friday was all you expected versus the No. 1-ranked T.R. Miller Tigers and No. 2 ranked Gordo Greenwave. The Tigers took game one 7-0 behind a dominating performance on the mound by senior JoJo Booker and timely hitting. In game two the Tigers struggled early in pitching and Gordo took advantage with 17 hits and an explosive seventh inning to win 18-7.

The Tigers scored its first run on an errant throw by Gordo catcher Collin Herring to right field, allowing Jason Konsler to score from first base. Next at bat, junior Stokes Jennings lined a shot to right field to extend the Tiger lead to 2-0. In the bottom of the third inning the Greenwave looked to have something going with no outs and runners on first and second. JoJo Booker got Koy Chapmen to line out to second base. Booker then walked the next batter to make the bases loaded. Buckling down, Booker struck out the number three and four Greenwave hitters to get out of the inning.

In the top of the fourth inning Miller added a run with a solid hit to the right field corner by Joshua Winton to score Russell Smith.

In the fifth inning the Tigers got some much need insurance runs. With two outs and two runners on base, Smith belted a deep home run to right field. Miller led 6-0.

In the sixth inning Stokes Jennings led the inning with a single. Jennings advanced on a sacrifice bunt by Jordan Williams. Drew Williamson followed Williams with a hit to centerfield to score Jennings.

The 7-0 lead was all Booker needed to close the door on Gordo. The Greenwave recorded only one hit (Davis Vails single) in the closing innings. Booker closed the game striking out three of the six final batters. In the win, Booker had 11 strikeouts. 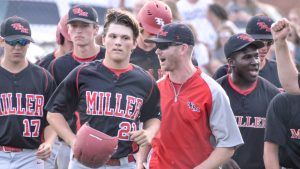 T.R. Miller’s Russell Smith and team celebrate after Smith’s three-run home run in the fifth inning of game one.

The Tigers fell behind early with Gordo scoring five runs in the first inning. The Greenwave forced Tiger pitcher Joshua Winton out the game in only .2 innings of work. Brother Caleb Winton replaced Joshua, but couldn’t find success against Gordo as well, lasting less than an inning.

Miller got a much needed boost in the bottom of first inning as hitters one through three reached base bringing cleanup hitter Hunter Brittain to the plate. Brittain belted a grand slam to right field to make the score 5-4. Gordo responded with three runs in the second inning. The Tigers added a run in the third on a sacrifice fly by Joshua Winton, and two runs in the fourth on a double by Drew Williamson and single to the outfield by Brittain. The Tigers trailed 8-7. 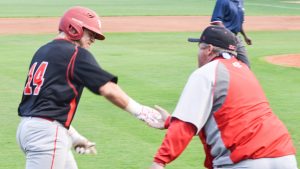 Hunter Brittain gets a congratulatory slap of the hand by Tiger head coach Kevin Madden after a grand slam in the first inning.

Gordo scored two runs in the fifth inning on RBI singles by Cole Nelson and Collin Herring. Gordo exploded for eight runs in the seventh inning to put the game out of reach. Gordo had six hits during the run.

Gordo pitcher Koy Chapman closed out the game with a strikeout. Chapmen picked up the win on the mound for Gordo. Joshua Winton suffered the loss. Stokes Jennings and Williamson came in to pitch for relief. Williamson pitched the final four innings.

Brittain was 2-for-4 at the plate with 5 RBIs to lead the Tigers at the plate. O’Neil White was 3-for-4 with a double and a triple.

Both teams will face off in a final matchup, today at 1 p.m. The winner will play the winner of Geneva versus Bayside Academy. Geneva won game one 6-1, with Bayside winning game two 5-3.