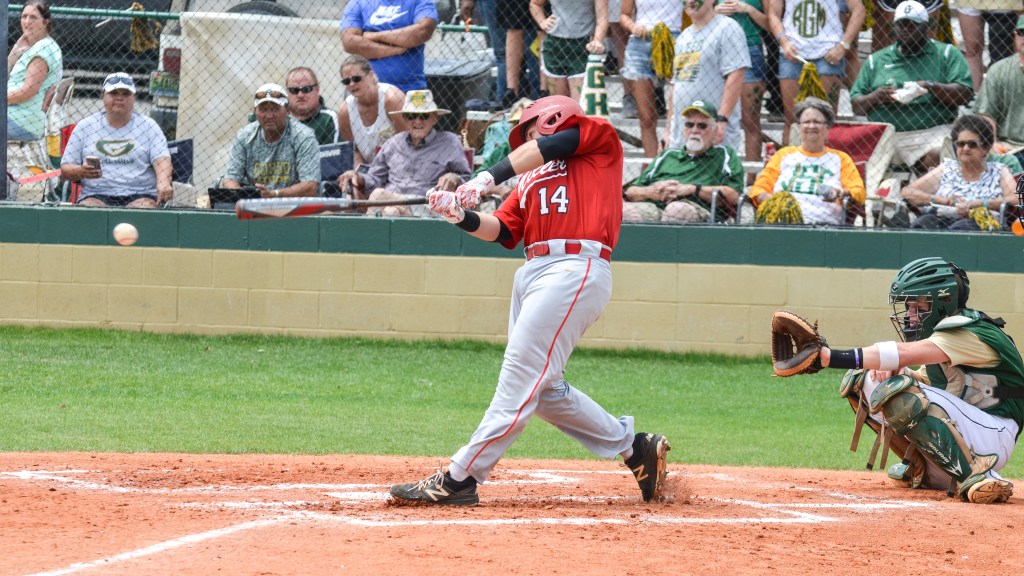 Hunter Brittain gets a hit against Gordo on Saturday.

For the second year in a row, the T.R. Miller Tigers were eliminated from the playoffs by Gordo, falling to the Greenwave 4-3, in a winner-take-all battle on Saturday.

At the top of the seventh inning, Miller was down 3-2, with two outs. At the plate was senior Jordan Williams. Williams fell behind early in the count 0-and-2, but worked the count to an even 2-and-2. Williams connected with a fastball to Gordo third baseman Nick Pounders. Pounders cradled the ground ball flawlessly, double pumped and fired to first. What was to be the game clinching throw to first bounced in the dirt and out of the glove of the first baseman, allowing the hustling Williams to reach base safely.

Up at-bat next for the Tigers was senior Joshua Winton. Gordo pitcher Cole Nelson got ahead of Winton with a blow by fastball to make the count 0-and-1. On the ensuing pitch, Winton connected with a fly to center field, on what look to be a routine play to end the Tigers season for a second time. The ball gave the center fielder the run-a-round– tipping off nothing but leather and scooting away.

Williams, who was running on contact, was readying to round third base when Gordo’s Koy Chapmen was finally able to relay the throw home from short center field. Williams slipped just past third base trying to return back after getting the hold up sign, so Chapmen fired to Pounders with anticipation of Williams going back to third. Pounders caught the ball and quickly spent around to apply the slap tag to Williams to end the Tigers season for a third time, except only Williams wasn’t headed back to third.

Arguably the fastest Tiger on the team, put his head down and headed home. Realizing no runner was in his vicinity, Pounders fired a throw home to Gordo catcher Ridge Wood to end the Tigers’ season for a fourth time. The throw by Pounders was too low and far from the plate for Wood to handle. Williams slid home head-first safely to the pandemonium of the Miller crowd.

The game was tied 3-3, with Winton on second base and Stokes Jennings stepping to the plate. Jennings connected for a hard ground ball to Gordo first baseman Collin Herring for the final out of the inning.

In the bottom of the inning, Gordo started the inning off with an infield single by Herring. Second batter at the plate Thomas Langdon hit a towering foul ball behind the plate in which Tiger catcher Hunter Brittain made a web-gem catch against the netting for the first out. Third batter of the inning Davis Vails hit a tailor-made double play back to pitcher Jennings, who fielded and fired to shortstop JoJo Booker. Booker was unable to make the catch, making everyone safe. The next Gordo batter hit a ground ball to Booker who corralled it and fired it to first base. The throw was a dart, and bounced short of first baseman Russell Smith, who was unable to catch it. The ball scooted to the Gordo dugout and Herring was able to easily score the winning run for the Greenwave.

O’Neil White was 2-for-2 with an RBI single to left field in the sixth inning to lead Miller at the plate. Drew Williamson had a double. Hunter Brittain had a hit.

Chapman was 3-for-3 with a double and an RBI to lead Gordo. Gordo had 11 hits.

Gordo will play Geneva in the next round of the playoffs.

The Tigers finish its stellar season 31-4.