Lady Eagles fall out of regionals in two 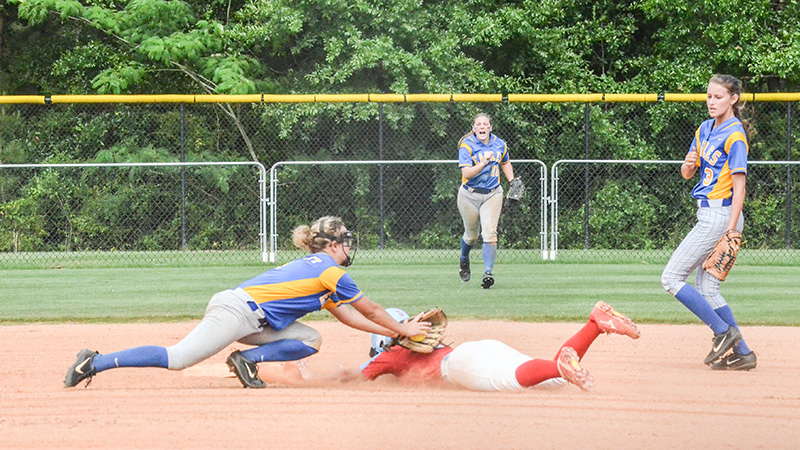 Neal's Adria Barnett attempts to make a tag on a Dale County runner as teammates Tori Wyatt and outfielder Jena Wyatt look on.

It was not the type of day the Class 4A Area No. 2 champion W.S. Neal Lady Eagles were hoping for when facing Satsuma and Dale County. The Lady Eagles suffered two blowouts to their counterparts that ended their 2017 season 12-20.

Courtney Ellzey was 4-for-4 with a double, triple and 4 RBIs to lead Satsuma. Alexis Weavers was 3-for-3 with 3 RBIs. Hannah Lollar had two hits and 2 RBIs.

Jena Wyatt had a hit for Neal.

Neal pitcher Ashli Wyatt suffered the loss. She allowed one walk and had one strikeout. Michaela Simon was the winning pitcher for Satsuma. She allowed two walks and had four strikeouts.

Dale County was quick to rebound in the bottom of the inning with seventh runs, with the biggest blows coming of a two-run single by Sierra Bates and a three-run homerun by Elizabeth Vickers.

Dale County’s Hannah Rogers performed strong on the mound the rest of the way, with her team scoring two runs in the bottom of the fourth to earn a 15-run mercy rule victory.

Rogers allowed two runs, on five hits, one walk. She had six strikeouts.

Taylor Peters suffered the loss for Neal. Peters allowed seven runs, eight hits, one walk, and hit two batters. She had three strikeouts. Ashli Wyatt came into the game in the third inning in relief of Peters.

Adria Barnett had two hits for Neal. Alexis McNew had a hit and a stolen base. Ashli Wyatt had a hit.