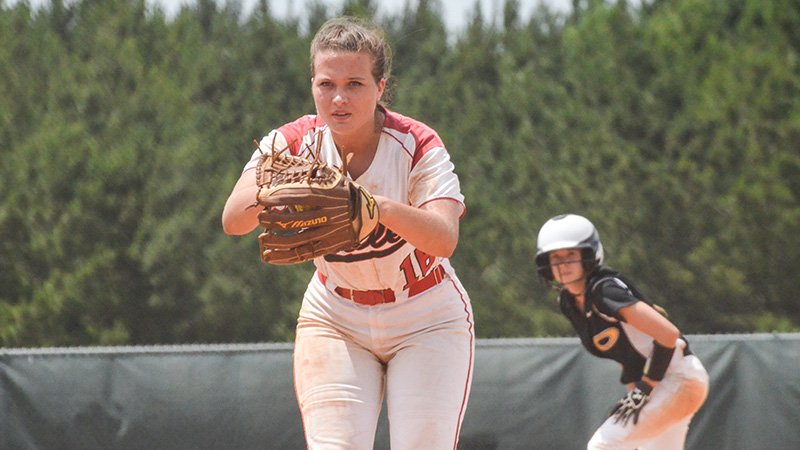 Runs were hard to come by for the T.R. Miller Lady Tigers in the Class 3A Regional tournament in Gulf Shores on Thursday. Miller lost a heart breaker in its opening round match up versus Mobile Christian, before falling in a close game to Opp to end their season 20-13.

Going into the bottom of the seventh inning, Miller led 4-2. The Lady Tigers were successful picking up an early out getting the lead off hitter to ground out to third baseman Anna Grace White. The next three batters, doubled, walked and doubled to close the TRM lead to 4-3. With the game tying run on third base and winning run on second, MC’s Macy Baxter stepped to the plate. On a 1-0 count, Baxter punched a hit to right field deep enough to score the winning run from second base.

Taylor Austin suffered the loss at pitcher, allowing five runs on seven hits and four walks. She had six strikeouts.

Miller scored all of its four runs in the third inning, and left six runners on base. Steely Ruzic was 3-for-4 with two singles and a double. Mary Madison Brown was 3-for-4.

It was a pitcher’s duel between Opp’s Graceanne Spears and T.R. Miller’s Taylor Austin. Opp was the first to break the score column, coming on an RBI single up the middle by Spears in the third inning. With the score still 1-0, Opp added two more runs in the fifth inning off compounding errors on the infield and a sacrifice bunt by Maggie Short.

Miller finally looked to strike in the bottom of the sixth inning when the Lady Tigers had runners on second and third, with only one out. Spears got Austin, the Miller cleanup hitter, to flyout in foul territory. Spears was able to strikeout Mary Madison Brown on an inside fastball to end the inning.

Miller kept Opp scoreless in the top of the seventh inning to give themselves a chance.

TRM senior Grace Ruzic started the bottom of the seventh with a single. Anna Grace White and Addi Smith both hit into fielder’s choices. Smith’s sacrifice scored the Lady Tigers first run of the game. Facing their final out of the game, Miller’s Morgan Longmire connected for an infield single to keep the game alive. Longmire was followed by a single to center field by Steely Ruzic. Spears buckled down and forced Mallori Floyd to ground out back to the circle for the final out of the game.

Steely Ruzic and Grace Ruzic each had two hits to lead the Lady Tigers at the plate. Longmire and Myra Reiss had a hit. Smith had an RBI.

Ariyou Hightower was 2-for-2 at the plate for the Lady Bobcats. Loryn Praytor had two hits.

Spears picked up the win, tossing the complete game. She had four strikeouts.