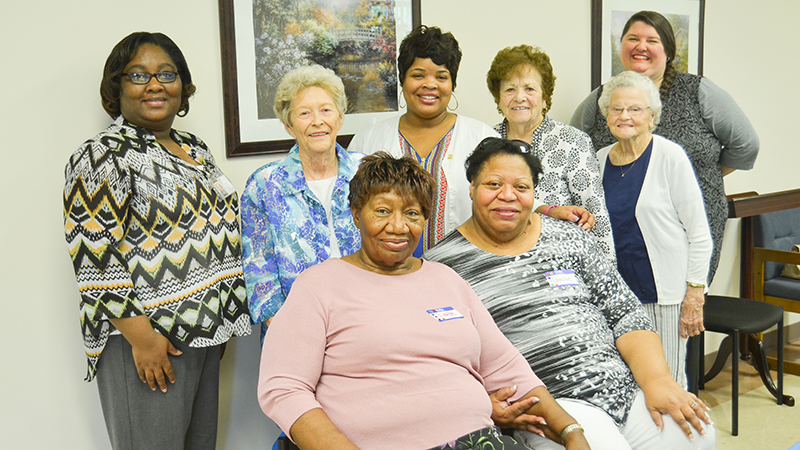 Class aims to educate, manage health risk in the community

A group of five well to do, spirited ladies gather together at the Escambia County Health Department. It’s Tues., May 16, the day these ladies have been looking forward to after six weeks of learning and sharing stories. While local high schools won’t graduate until next week, these women– Lucy Duval, Luete Ellis, Jimmie Lois Jackson, Cozette Luker and Gussic McQueen­– will serve as the inaugural group to graduate from diabetes class.

The course is taught by diabetes educator and registered nurse, Jessica Fountain. Fountain said the experience teaching the class has been eye opening.

“It’s been a joy to share knowledge with the class,” Fountain said. “Honestly, I think they learned a lot from each other just by sharing stories and bonding in class. It’s been a good experience.”

The class started in March and finished in mid-April. Each class was a three-hour session.

Duval, age 84 and a diabetic, said she learned some new things through the class.

“I learned how diabetes affects the body,” Duval said. “The learning process never ends. You can always learn something new.”

McQueen, a 65-year-old diabetic, said she was motivated in joining the class to learn more about living a healthier lifestyle

“I’ve been going at it the wrong way,” McQueen said. “I thought I knew it all. I want to live to be an old woman. My mom died at 58. A couple days ago I went to the bakery in East Brewton and just walked out. I knew better.”

Ellis, age 79 and a diabetic, said it’s challenging when she goes to family gatherings where food is plentiful, but it’s through the class she has learned to eat healthier.

“On Mother’s Day my family had some of everything to eat,” Ellis said. “I also cook for my grandkids because they like to eat. I don’t like to eat out anymore. I’ve learned it ain’t what you eat sometimes, it’s about how much you eat.”

One of the exercises the class took part in made quite the impression on its students. Fountain had the group choose food items from menus gathered from around town. After choosing their meal, Fountain brought out a tub of lard and filled the empty plates to correspond with the meal each individual chose.

“That makes an impression on you looking at your plate full of lard,” Duval said. “It makes you think about what you’re eating.”

People suffering from diabetes have too much glucose (sugar) in their blood. Too much glucose in the blood can lead to serious health issues including cardiovascular disease and kidney damage.

Escambia County and Mobile County are among the top-5 counties in the state of Alabama with individuals living with diabetes. According to the Centers of Disease Control and Prevention, from 2004 to 2013 there has been a 43 percent growth in numbers with diabetes from 2,908 to 5,095 in Escambia County.

“When no one in your family has been a diabetic, you can still be a diabetic,” Luker said. “That’s what happened to me. I thought I had the flu. I finally went to the doctor and I found out it was more than just the flu.”

Dr. Jessica Hardy, a RWJF Public Health Nurse Leader, and Dr. Hill, Alabama Action Coalition Leader of Alabama Health Action Coalition (AL-HAC), collaborated with the Brewton Health Department under the leadership of Chad Kent and Suzanne Terrell to make the program available to community residents with the hope of continuing to offer sessions as a service at the health department.