Martin has developed a board game,”Tag and Release,” for those who want some sort of fishing experience without actually sitting in a boat.

Martin grew up in an area that boasts good Catfish ponds and he has always loved fishing. 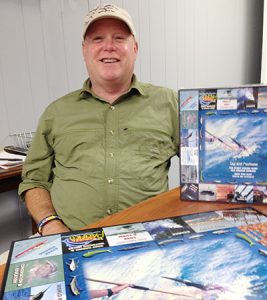 “Since around 70 percent of the Earth is covered with water, plus the fact that I grew up where I did, it is no wonder that I love fishing,” he said. “I grew up in the Keego community near Brewton. I started fishing with a cane pole when I was four or five. My daddy rewarded me with a Zebco 202, when I mastered the pole technique. After that I was hooked.

“I also love living on the coast,” he said. “Because of this, I live in Navarre where I am a real estate agent. I am able to spend time fishing and came up with the concept for The Tag and Reelease Sport Fishing Game.”

Martin said  his game is a great pass-time for anglers.

“I have been working on it for some time, and finally, it is ready for sale,” he said.

The angler with the highest score (weight), wins the game. The game is new and Martin is marketing them in several places.

He’s had some success in launching it to the public, with an appearance at the Miami International Boat Show.

“I want to get it into the Bass Pro Shop in Destin, and in other big stores such as WalMart, Target, and Barnes and Nobles,” Martin said. “I would like to be able to get on Shark Tank, too, but right now I am doing what I can to advertise.

“I hope all anglers enjoy playing the game as much s I enjoyed creating it,” he said. “I believe it is more educational than playing Pokemon Go.”

Martin is the son of June Martin of Keego and the late Bob Martin. He is a 1981 graduate of T.R. Miller High School and earned an associates degree from Jefferson Davis Community College.