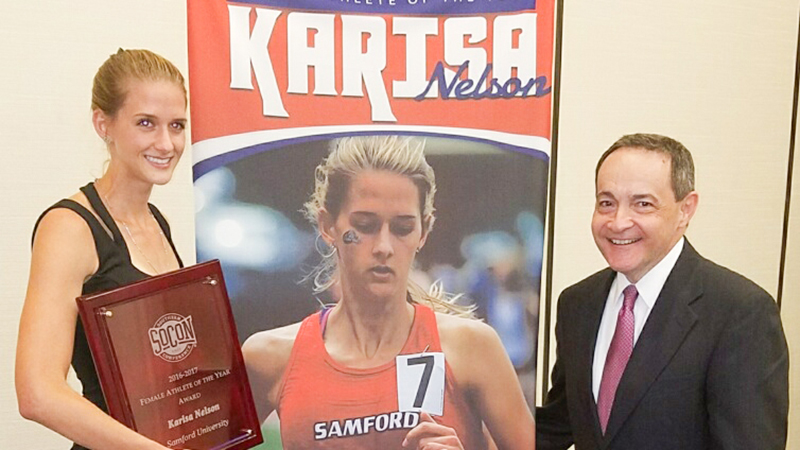 “It’s a great honor to receive the SoCon athlete of the year award, especially when I’ve seen the amazing accomplishments of previous winners,” Nelson said. “I’m very thankful to all the people that support me.”

Nelson has had a breakout season in cross country and track. In March, she became Samford’s first Division I national champion as she won the women’s indoor mile with a time of 4:31.24.

During the fall of 2016, Nelson was named the league’s Women’s Cross Country Runner of the Year after winning the 5K event in Chattanooga, Tenn. She placed 21st at the NCAA cross-country championships and earned honorable-mention All-America honors.

Nelson holds a 3.0 grade point average in biochemistry at Samford and has been named to the Southern Conference Academic Honor Roll. In community service, she has volunteered with the Christian Services Ministry and has been a part of an initiative to plant trees on Lakeshore Drive adjacent to the Samford campus.

Nelson will be in action next week to compete in the 1,500 meter run at the 2017 Track and Field Championships in Eugene, Ore.

She’ll run in the semifinals Thurs., June 8, at 2:46 p.m. central time with the time subject to change.

***Contributions of story made by samfordsports.com