Brewton 8U heading to state 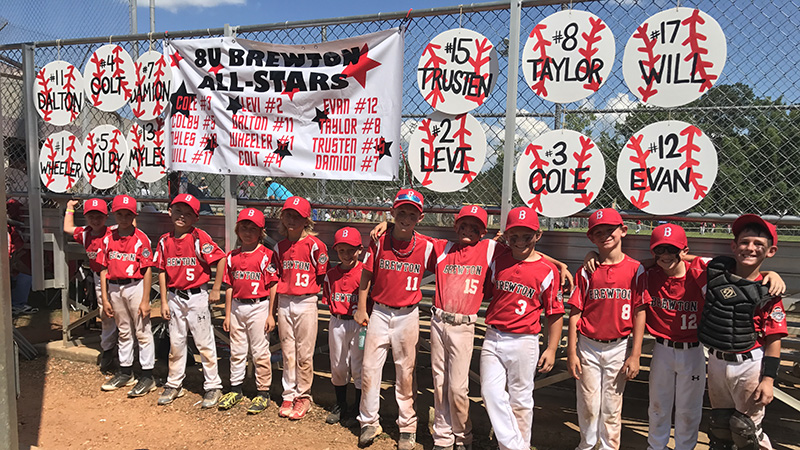 8U Brewton All-stars captured second place in the district tournament in Evergreen.

The Opp 8U boy’s all-star team captured the district title last week after defeating Brewton 7-4 in the final round. Both teams will advanced to the state tournament in Opp set to begin on Thurs., June 29.

East Brewton continued its success in the second round after defeating Covington County in round one.

Jarrod Crook was 1-for- 2, with a home run, 2 RBIs, and a run scored. Luke Brown was 2-2, triple and two runs. Colton Cain had a double and an RBI. Joshua Kiser, Hunter Stricklen and Kade Parr had a hit.

Cole McMillan was 3-for-3, with a double, triple, three runs scored , and 3 RBIs to lead Brewto. Trusten Barrentine went 3-for-3 with two runs scored.

It took seven innings to decide a winner, but in the end it was Brewton picking up the win. Brewton got the game started with a bang when Cole McMillan connected for a two-run home run good for more than 200 feet over the left center field fence. A triple by Taylor Thompson triple scored three more runs. Brewton added five runs in the 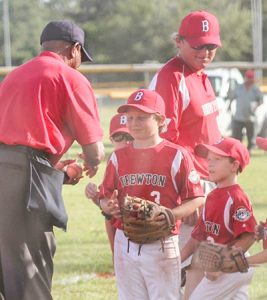 Cole McMillan receives his home run ball from the umpire.

second inning on five hits with the biggest coming on a double by Trusten Barrentine and inside the park home run by Dalton Mandel. East Brewton got it going with back-to-back triples by Luke Brown and Tate Brooks to score its first run of the game. East Brewton exploded for five runs in the third inning to make the score 11-7 in favor of Brewton. East Brewton added four runs in the fourth inning on five hits to tie the game 11-11. Brewton took the lead on a double by Wheeler Milligan.

Brown had a home run, triple and four RBIs to lead East Brewton. Booker had a triple and scored a run. Brooks was 2-for-3 with a triple. East Brewton had 14 hits.

Opp never relinquished the lead after scoring three runs in the first inning..

Evan Anthony was 2-for-3 at the plate for Brewton.

Trusten Barrentine was 2-for-3 with a triple and run scored.

Levi Duke and Wheeler Milligan each had a hit and run scored. Brewton had 13 hits.

Too close to home