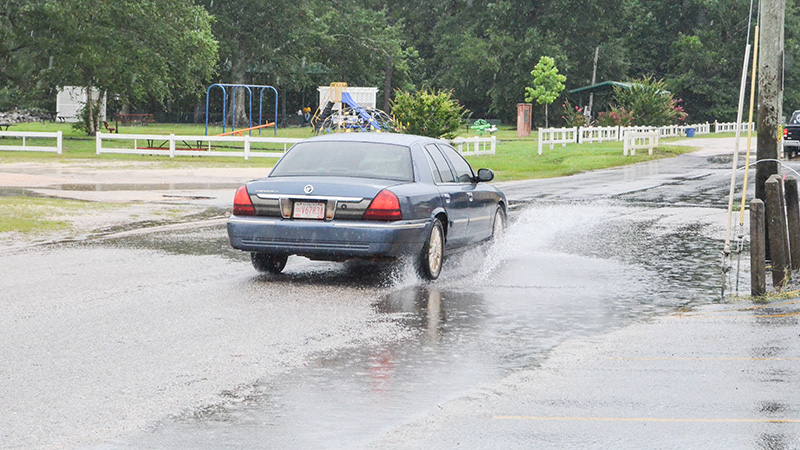 A car travels through standing water in East Brewton Tuesday.

Gov. Kay Ivey declared a state of emergency for Alabama Tuesday as “Potential Tropical Cyclone Three” worked its way toward the mouth of the Mississippi River.

What that means for local residents is rain – and lots of it.

“That system that has potential for local impacts is currently over or near the Yucatan,” said Escambia County EMA director David Adams. “The National Hurricane Center shows a very high probably of formation of a tropical cyclone over the next day or so. The current thinking is to move inland to west of us, i.e. Louisiana or Texas; however, it is too early to predict with any degree of certainty an accurate track, until the system becomes more organized.”
Tropical storm conditions reached the coast within the warning area Tuesday. Today, total rain accumulations of 4 to 8 inches with isolated maximum amounts of 10 inches over southeastern Louisiana, southern Mississippi and Alabama, and the western Florida Panhandle through the evening.

That additional rain, when coupled with consistent local rainfall, has many residents worried about localized flooding.

“We have had significant rainfall over the last couple of weeks, but times of little or no rainfall have been mixed in,” Adams said. “Hopefully this will allow for enough water to move out to prevent any significant flooding. In the mean time, I have not received any flood warnings from the NWS.”

Escambia County will remain under a flash flood warning through Thursday. The chance of rain will decrease as the weekend approaches; however, Tropical storm Bret, which was moving along the northeast coastline of South America Tuesday, will bring additional rainfall next week.