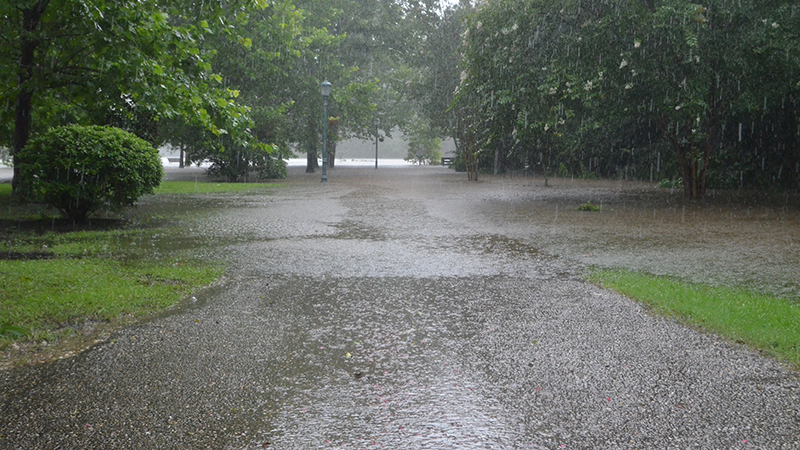 Last week’s view at Jenning’s Park is much different today.

The storm dropped more than seven inches of rain, causing rivers and waterways to swell. Last Wednesday, Burnt Corn Creek peaked at 14.3 feet while Murder Creek peaked just over 22 feet. As of Tuesday, the area remained under a hazardous weather outlook projection by the National Weather Service as the risk of continued flooding continues.

In Brewton, that spelled a big problem at the intersection of Sowell Road and Martin Luther King Jr. Drive, utilities manager Ray Madden said. A sanitary sewer overflow notice was issued for those areas, along with St. Nicholas Avenue and Gordon Lane as rains poured into manholes and filled sewer lines.

“There are two manholes there, one of which is 20 feet deep, and we don’t know exactly what is causing the problems until we get in there,” Madden said.  “We’re going to have to reconfigure these lines so that it’s a permanent fix to the problem.”

Residents are asked to avoid areas of raw sewage and to report any sightings to the utilities department at 809-1783.

The project was originally designated as part of the latest ATRIP grant; however, because of the emergency situation, must be corrected immediately.

Cost is estimated between $50,000 and $100,000; however, the city hopes to secure weather-related emergency grant funding.

“But, it could be more,” said Russell Holland of DMD Engineers. “Right now, the area is closed because of health and public safety.  We’re in the process of getting three contractors to get us a price, and work will take about a week – if the weather allows.”

Holland said ATRIP funding can’t be used for the project, and that designated money will be used on another area.