A Brewton man is in custody after allegedly firing a gun at an Escambia County Sheriff’s deputy on June 30.

ECSO Chief Deputy Mike Lambert said Michael Shane Wickliffe, 47, of 268 Trinity Lane, is charged with being a certain person prohibited from carrying a firearm and first-degree attempted assault of a law enforcement officer. 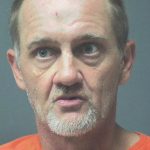 Lambert said a deputy was responding as a follow-up on a domestic violence call.

“When the deputy pulled up, he saw (Wickliffe) standing under a tree,” Lambert said. “The deputy, driving a marked sheriff’s Tahoe, bumped his blue lights on.”

Lambert said Wickliffe was holding a 1947 Colt 47 firearm and fired it off as the deputy pulled up to the residence on Trinity Lane that evening.

“The deputy drew down on him,” he said, adding that Wickliffe was then taken into custody without further incident.

Lambert said Wickliffe told the deputy he thought he was a prowler.

Wickliffe is a convicted felon, and his bond hearing was held on Monday.