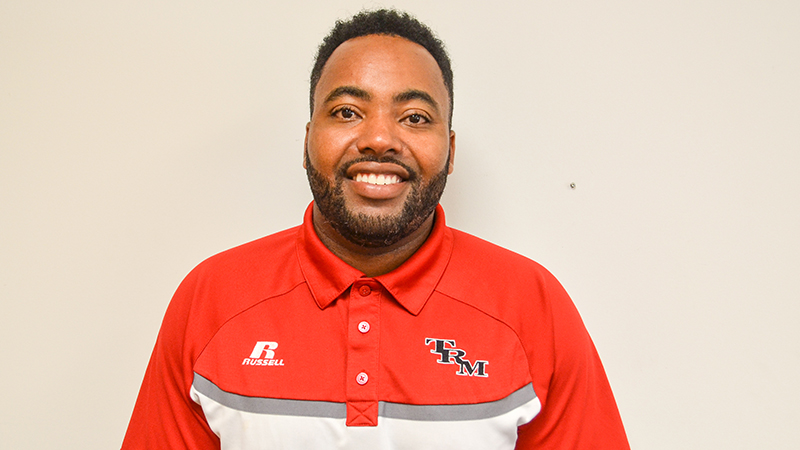 Williams spent three years as an assistant coach in football and head track coach at Pell City prior to joining T.R. Miller.

T.R. Miller football will have a new face on the sideline this upcoming season. Birmingham native, Brandon Williams, 34, joined the Tiger staff in early June. Since being introduced as the new running backs coach and assistant linebackers coach for the program, Williams said his focus has been on learning as much as possible.

“It’s been a big time learning curve,” Williams said. “I’m just getting acclimated to how things work here. I’m fairly new at coaching running backs but I’m excited to expand my knowledge of football. Pretty much I’ve been watching and learning and just being a sponge so in the coming months I’ll be in it fast.”

I’m excited to have a guy that’s going to bring a lot of energy to our program,” said Thomas. “We’re making some shifts in our staff. Coach Chris Baker will coach defensive line and will serve with Coach Marc Edge as co-defensive coordinators. (Williams) comes highly recommended as a teacher in the classroom as well. He’s going to do some great things for us football wise and in baseball too. We’re glad to have him.

Prior to joining TRM, Williams had more than nine years of volunteer coaching experience. He got his start coaching at Gresham Middle School. He followed with six years at his alma mater Shades Valley High School where he helped coached football and baseball. In a three-year span he coached at Oak Mountain High School and Pleasant Grove, before finally teaching and coaching wide receivers and track at Pell City.

Williams has had an unconventional journey in the coaching field. He graduated from Shades Valley in 2001. He played baseball for four years at Miles College and started working a temporary lab job that turned into a six-year job. In the six year stint he volunteered coached as well.

“A light bulb goes off that says, I’m doing all this work with labs and coaching,” said Williams, who finally earned his biology degree from Miles College in 2014. “I should condense it all into one job. I decided to finish my last three classes in school to get my degree. I had a hiatus there. I’m a late bloomer.”

Williams eventually moved on to earn his master’s degree in secondary education online from the University of Phoenix.

“I had a lot of experience coaching, in good programs and around good coaches,” Williams said. “I was only a volunteer up until three years ago when I finally had the credentials to become full time.”

Williams said his time at Pell City was an experience he needed to grow as a coach.

“Head coach Keith Etheridge is a great guy and I hated to leave him, but I had to make a decision for my career,” Williams said. “He won back-to-back championships at Leeds. He cared about the kids more than any coach I ever been around. That really resonated with me.”

Even looking for the next chapter in his life proved uncertain for some months. A friend informed him of an opening at Escambia County High School, in which he applied.

“I was going to go there,” Williams said. “I waited but I didn’t hear anything with the board’s approval. I applied for the position here, and it seemed everything lined up. It had to be God. Things happened perfectly. I felt so welcomed. It was a good fit for me. I couldn’t let an opportunity pass being with a school with so much tradition in winning and working with a great staff.”

In his spare time he travels to Birmingham to play semipro baseball (he was inducted into Sports Hall of Fame at Shades Valley in 2014), and volunteer with his small group at Faith Chapel Christian Center. He serves as the leader of his small group The Brotherhood.

“It’s just a group of Christian guys with the same interest in having fun and getting closer to God,” Williams said. “I learned and met a lot of people through the group that maybe I wouldn’t have if just going to church on a regular basis. It’s been a good experience.”

Williams sites his pastor Mike Moore as an influence on his life, as well as former Shades Valley coach Curtis Coleman. He said it’s his mother, Martha Carter that has showed him and his younger brothers, Ramon and Ivan, work ethic.

“She raised us by herself,” Williams said. “She was a hardworking lady. That’s where we got our work ethic. All throughout us growing up she worked two jobs. I wouldn’t be where I am with out her.”

Along with helping in football, Williams will serve as an assistant coach for baseball. In the classroom he’ll teach anatomy and environmental science.

Williams said he is ready for this next chapter in his life.

“From the people I have met so far I can tell they really love their community and sports,” Williams said. “Everyone has been very welcoming to me. I feel blessed to be a part of T.R. Miller.”