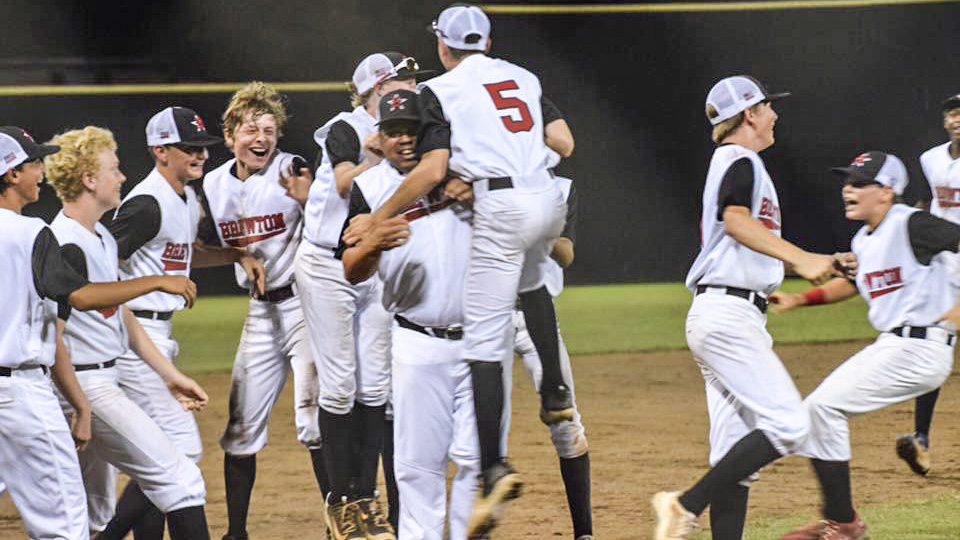 The Brewton 13U all stars celebrate its state title win over Matthews Park on Monday.

On Monday the Brewton 13U all-stars made history by capturing the Alabama Babe Ruth League 13U state title in Mobile. Brewton defeated Matthews Park 2-0, closing the tournament with a 4-0 record. The team became the first Brewton 13U Babe Ruth team to advance to regionals.

“We played well all weekend,” said Brewton head coach Roberto Flores. “We limited the mistakes, threw a lot of strikes, and had key hits when we needed them.

“They were hungry for a state title, and they really deserve it. It has been a privilege to coach such a talented group,” he said. “The best thing about this team is they are competitors. They play with a lot of heart. I look forward to see what these boys can do in the regional tournament.” 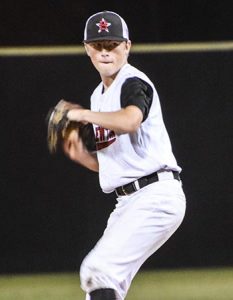 Jordan Crane pitches for Brewton in the state title win.

Jordan Crane picked up the win on the mound, pitching the complete game shutout. Crane allowed two hits and three walks, while striking out one batter. Kyle Blunt was the losing pitcher for Matthews Park.

Brewton scored its first run in the third inning on a single to center field by Trent Cooper.

Matthews Park was threatening to tie the game in the top of the fourth inning, but Crane got Hunter Gibson to ground out to third baseman Kannan Carter to end the inning, stranding runners on third and first base.

Matthews Park threatened again in the fifth inning, but Crane was able to strikeout a batter looking to get out of the jam.

In the bottom of the sixth inning, with two outs and runners on second and third base, Miller Hart singled a line drive to center field to score Kyle Blevins.

Hoping to get a rally going, Matthews Park’s Kyle Hipp led off the seventh inning with a single to center field. Any hopes of a rally were quickly erased when Brewton was able to turn a 4-6-3 double play for two outs. Crane closed out the game, forcing Bryson Gainey of Matthews Park to ground out to Blevins at shortstop.

Hart was 2-for-3 with an RBI to lead Brewton at the plate. Cannan and Cooper each had a hit. Blevins and Jordan Sims scored a run.

Prior to the championship game, Brewton defeated Westside 10-0, and Phoenix City twice, 5-1 and 4-3.

Brewton had 23 hits for the total tournament, one extra-base hit, 31 walks, 10 strikeouts, and scored 21 runs. Blevins led the team with a .500 batting average. Atkinson led the team in RBIs with five.

Brewton will travel to Lincoln, Ala., to play in the regional tournament. The tournament begins Thurs., July 20. A win there will earn the team a spot in the Babe Ruth World Series in Mountain Home, Ariz.

Flores was the winning pitcher. He pitched three innings, allowed one hit, no walks, and struck out two. Kannan Carter closed out the final two innings in shutout fashion, allowing only one hit, one walk, and striking out two.

Brewton had six hits as a team. Tyler Brooks and Gavin Leggett each had an RBI. Miller Hart scored two runs. Jordan Crane was the winning pitcher. Hart came in relief in the second inning and allow only one run (unearned), and struck out three.

Next at bat was Nolan Atkinson. Atkinson singled to the outfield to score Sims and Cooper, tying the game at 3-3. K Carter walked in the next at bat to load the bases again. Miller Hart stepped up to the plate with no outs looking to end the game. Hart connected solid for a line drive but it landed in the glove of the Phoenix City shortstop for the first out. With one out, Jaxson Flores stepped in the batter’s box. Flores took the first pitch for a strike. The next three pitches fell out the strike zone to put the count at 3-and-1. Flores’ patience paid off again, as the next pitch was out of the strike zone. The walk sealed Brewton’s come-from-behind win in the final inning.

Flores picked up the win on the mound. He pitched four innings, allowed one run, on four hits, no walks, and four strikeouts. Blevins started the game and pitched three innings. He allowed two runs, on four hits, five walks and struck out one.