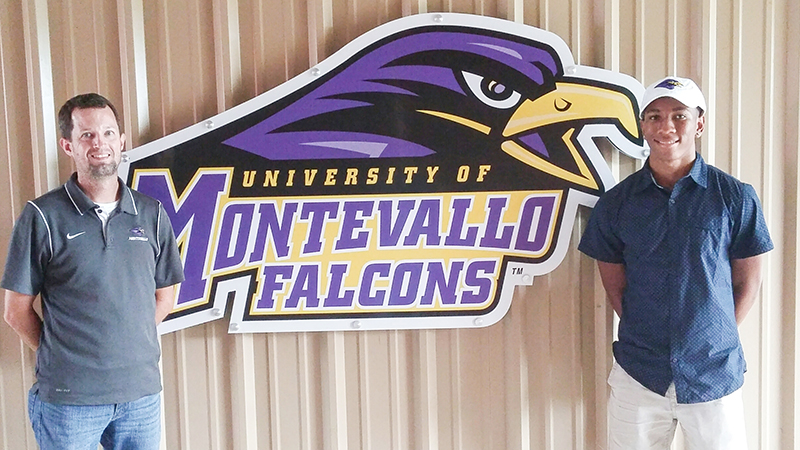 Former T.R. Miller track and field standout Henry Davison will make the jump to the next level after officially signing in early June to join the Montevallo Falcon track and field team this fall.

Davison said Montevallo coaches gave him a call of interest midway through the track season. From that initial contact he made a visit to the campus and felt the school was a right fit for him.

“It was a small campus, almost like high school, so it wasn’t overwhelming to me,” Davison said. “Montevallo just had a good family vibe that appealed to me.”

Davison said he will train primarily in the triple jump and long jump in college, but also sees a possibility in competing in different sprinting events.

Davison started participating in track at TRM his junior year. He had a breakout senior campaign, where he was a staple atop the leader board in the 110-meter hurdles, high jump and triple jump.

His season ended on a high note with an individual 3A AHSAA state title in the triple jump.

He was also awarded by T.R. Miller Athletics as the Male Most Valuable Track Athlete.

TRM track and field coach Eddie Brundidge said Davison is the type of player every coach dreams of having.

“Henry is one of the most diligent, well-mannered, coachable kids I have coached in 30 years,” Brundidge said. “He truly has a passion for track and loves to compete. I look forward to seeing him do well at Montevallo both on and off the field, and more importantly 10 years from now. He’s a great kid that will be missed greatly.”

Davison also played basketball his sophomore year and football all four years at TRM. His senior year he helped lead a young Tiger football team to the first round of the playoffs.

He was named to the 2016 All-County team as a defensive back.

He will join TRM alums Katie Nelson and Mykayla Harrison at Montevallo.

The track and field team is head coached by Tommy Barksdale.

Davison said he plans to study exercise science and nutrition in college. He is the son of Mulesher Carol Davison and Henry Davison Sr. of Brewton.