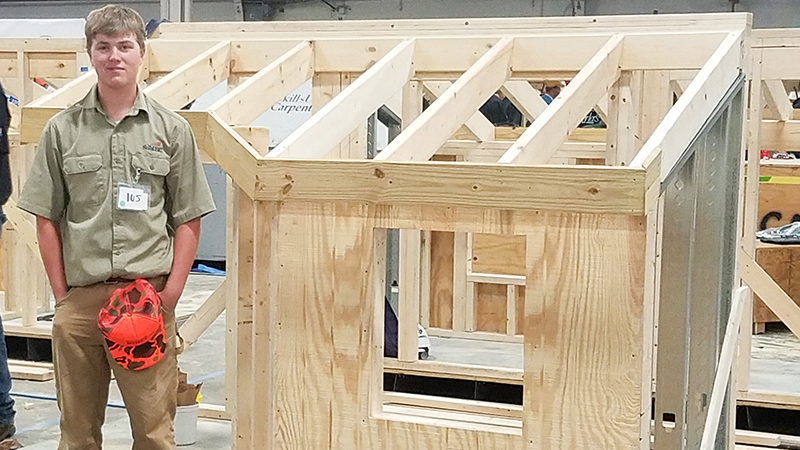 Haegan Dykes placed 13th overall at SkillsUSA Nationals in Kentucky. Pictured is Dykes with his carpentry work at the national competition.

He competed against 46 other students in the carpentry event and finished 13th overall. Dykes said although he did not bring home the top three fishinsh he hoped for, he did come home with many great memories, friends, new tools, and more knowledge in carpentry. He spent the week visiting nearby power plants, meeting new people and making memories. 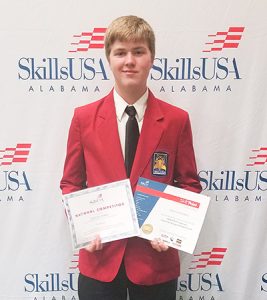 Dykes competed last year as a sophomore in the district competition of SkillsUSA and finished first place advancing him to the state level where he finished second place.

This year as a junior, Dykes competed at the district and state levels, winning first place in both before advancing to nationals.

He plans to begin preparing for next year’s competition and hopes to return to Nationals again. Dykes spent most of his life shadowing his father, Jarrett Dykes, as he worked as a carpenter and many other things, where he learned most of what he knows about carpentry. From a young age, he has always had a skill for building things.

Dykes’ teacher Kenny Revel has also been a big influence on him throughout his time at the technical center.

Dykes was accompanied on this trip by Revel, David Lanier; his mother, Crystal Hutcheson; his brother, Copelan Dykes; and Hope Waldrop.