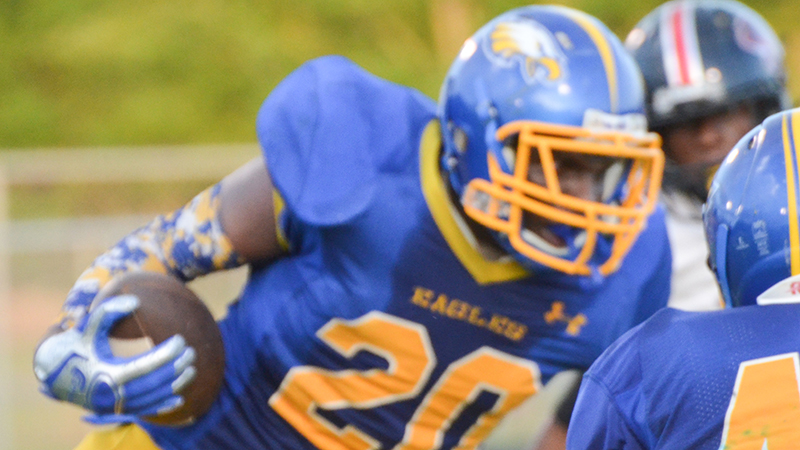 An Eagle ballcarrier runs the ball during its spring game versus Hillcrest.

W.S. Neal Eagle football has pushed forward in a new era under first year head coach Andro Williams. The team looks to bounce back from a forgettable season in which it went 3-7, it’s worst season since 2011.

Conditioning, strength and toughness have been some focal points for Eagle players during summer workouts. Williams said the summer has been a work in progress, as players and coaches get more familiar.

“(The players) have worked pretty well so far,” Williams said. “They’ve handled the biggest bulk (of workouts). We’re trying to prepare their bodies down the road for the course of the season. This is the first time they’ve done 7-on-7 on the field type of stuff. I think they’ve enjoyed it. It’s a fun way to utilize conditioning.”

Williams said he’s been a little patient during workouts so players can adjust.

“The main thing is we want to get the players game ready and conditioned and strength wise where they need to be,” he said. “It’s a little bit more than what they have done in the past. It’s difficult work, so I’ve been a little patient to understand that they haven’t done this type of training at this point in the year. This is a transition for all of us. We’re just going to work to get better and do a little bit at a time.”

The Eagles’ 2016 season was decimated by injuries. The team lost as many as eight players at some point of the season due to injury, with most missing extensive time.

A bright spot for the team was its defense, particularly its defensive front. The team will be without its sack leader from a year ago, Ricky Samuel, who transferred to T.R. Miller.

Rising senior Jacobey Hawthorne will look to bounce back after he was bit with the injury bug midway through last season. Senior Marvin Maddox will look to build on a breakout season. Maddox led the Eagles in rushing with 924 rushing yards and 11 touchdowns. As one of the Eagles superior athletes, he will play both sides of the football.

Williams is optimistic about the team, despite its youth and adjustments made in personnel and system.

“I think the players will see last year as motivation for this year,” Williams said. “We’re just working to get better day-by-day, week-by-week, month-by-month. That’s our focus. That’s what we can control. Everything else will take care of itself.”