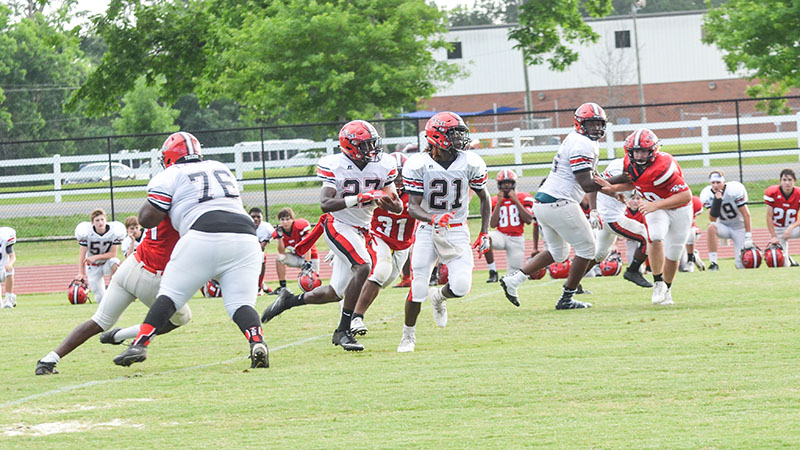 Joshua Jolly takes off down the seam of the field with No. 21 Darius Webb ahead on the block during a spring game earlier in the year.

“We started doing two day workouts in June which, is a day less than last year for us,” Thomas said. “In July, we’ll keep it to three to four days for the last couple of weeks. We’re working hard and getting the strengths and gains we want. The players know what’s expected and the seniors are doing a good job leading as well.”

The Tigers will have a new style of play on both sides of the ball.

“We restructured our defense and offensively, it’s a total learning curve. Going into the first game of the season we’re going to be immature in our system on both sides of the ball. I see us as a team that has talent, and like last year I believe we’ll continue to grow and get better as the season progresses.

“There’s so much we can do with this bunch, but we got to start at the base to try to figure things out and get good as we build into it.”

Thomas said the Tigers will be young in the secondary, and will boast fresh faces on the offensive line and quarterback positions.

“We have some question marks in certain positions,” Thomas said. “We’re revamping our offensive line. Our secondary will be really young but they’re responding really well to what we’re doing. We’ll do some relying on our running backs. We got as good a backfield as anybody in the state. Again, it’s just learning the system and getting the guys up front on the same page. Our defensive seven up front will be really good if we stay healthy. Health was a killer for us last year. We lost two of our great players. Injuries are the story of a lot of programs, but if we stay healthy we’re going to be one of those teams that will be really good come playoff time.”

The Tigers will return two seniors in the back field in DeMarquis McMillan and Michael Campbell. McMillan had a spectacular start to the season before going down with a knee injury in Week No. 4 versus Hillcrest-Evergreen that sidelined him for the rest of the season. Campbell handled most carrying duties after McMillan went down, and rushed for 1,154 yards and 20 touchdowns. Senior Chris Noble, a 2016 all-state honorable mention, will anchor the offensive line. A strong newcomer to the Tigers and second team all-state selection in 2016, junior Ricky Samuel, will join a defensive line led by seniors Trentez Johnson and Ty Lett.

“That’s when we need to be our best as a team. We have to fight through the early part of our schedule,” he said. “It’ll be tough early, but I think we can be even better in the end than we were last year. If we can stay healthy, I like where we can go.”