An Atmore man is charged with allegedly trying to drown a pregnant woman and her unborn child earlier this month. 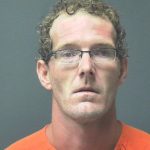 Lambert said a passerby happened upon the incident as it unfolded.

“They came across the bridge on Railroad Street at Perdido Creek when they witnessed a pregnant female, bleeding from the face, and (Rayborn) exiting a truck at the creek,” Lambert said.

That’s when the motorist allegedly saw Rayborn throw the woman into the creek, holding her head under the water in what appeared to be an attempt to drown her.

“The passerby then shouted at (Rayborn) who released her, ran to his truck and attempted to leave,” he said.

Law enforcement responded after the woman was taken to the hospital.

Rayborn was later located by deputies and booked into the Escambia County Detention Center under a $250,000 bond. He is now charged with violation of probation and remains in the county jail.