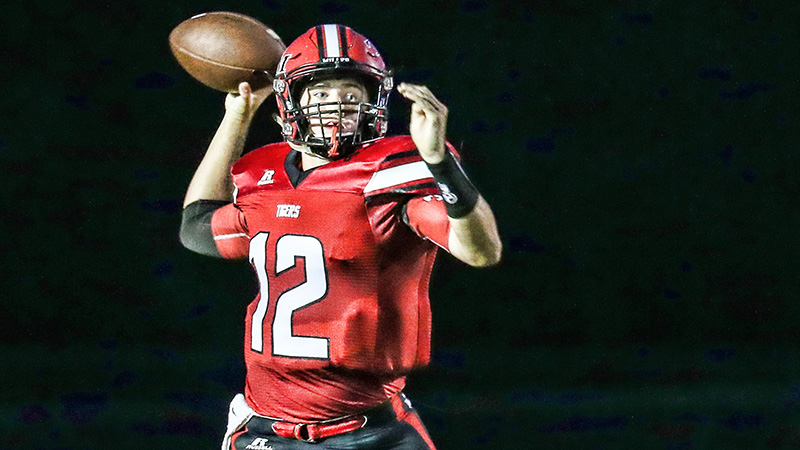 Caleb Winton makes a throw on the run versus Monroe County. Ronnie Knowles | Down South Photography

Former T.R. Miller starting quarterback Caleb Winton will lace up the cleats representing the Tigers for the last time Thursday. The Shorter University commit received the news this past weekend for selection to play in the annual AHSAA North-South All-Star football game at the Cramton Bowl in Montgomery.

The North-South football game features recently graduated seniors and is a part of the AHSAA’s All-Star Sports Week this month.

Winton said he is excited and thankful for the opportunity to play in the North-South football game and to play against top level talent.

“I’m excited about the opportunity to represent my family, T.R. Miller and the community as a whole,” Winton said.

“I necessarily haven’t had the opportunity to do that exactly so that’ll be special. I’m looking forward to competing against college level players. At the 3A level you may not see that level every week. So this an opportunity to play against some top level players before I head into camp at Shorter in a couple weeks.”

In his senior season, Winton passed for 1,306 yards with 15 touchdowns and six interceptions. He also rushed for 99 yards and five touchdowns. He led the Tigers to the first round of the playoffs, finishing the season with an 8-3 overall record and 6-1 record in the region. For his high school career, he passed for 3,172 yards, 30 touchdowns and 11 interceptions. He was named to the 2015 and 2016 All-County team.

TRM head football coach Andrew Thomas said he is proud of the opportunity Winton has to play in the game and represent T.R. Miller.

“Caleb will show tremendous class and represent the town of Brewton well,” Thomas said. “Not many guys get an opportunity to play in an all-star type game and I’m sure Caleb is excited and looking forward to getting on the field.”

Winton is the son of Randy and Rachel Winton of Brewton. He will attend Shorter University in the fall.

Brewton to get new urgent care