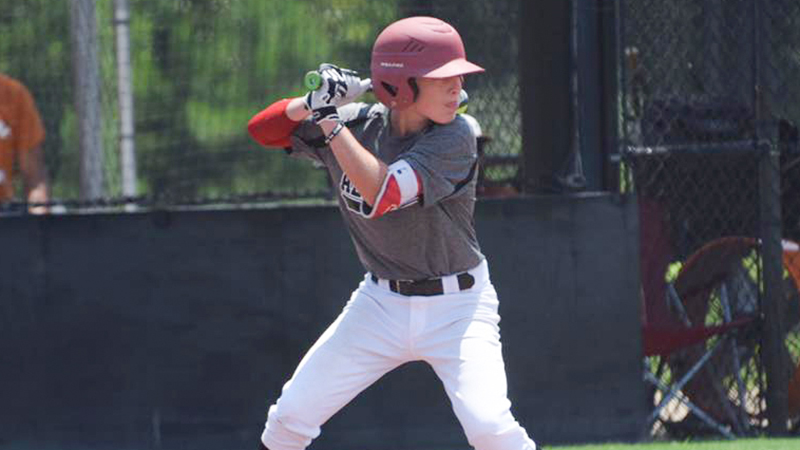 Kyle Blevins ready in the batter's box for Brewton.

The Brewton 13U All-Star team had its magnificent run come to an end on Sunday at the Southwest Regional Tournament in Lincoln. Brewton suffered its first loss of the tournament versus Eagle Pass, Texas on Friday. Brewton rebounded to win over Madisonville, La. on Saturday, before losing against familiar opponent Matthews Park in a close game on Sunday.

Brewton 13U head coach Roberto Flores said the team played tough throughout the tournament, and he couldn’t be more proud of how his team competed.

“They are a really talented group and will only get better as they gain experience from opportunities like playing at regionals,” Flores said. “They represented Brewton and East Brewton communities very well. We would like to thank all of our sponsors that made this opportunity possible, and also a big thank you to the entire community that stood behind us, supported us, and cheered us on as we took to an unforgettable journey.”

Down 2-0 heading into the bottom of the fifth, Brewton looked to make a move for the win. Jaxson Flores got the inning going with a leadoff walk. Flores advanced to second on a pass ball. Jordan Crane followed Flores by reaching base on an infield error. Crane eventually stole second base. With runners on second and third base, Logan Rowell smoked a line drive to left field to score Flores to make the score 2-1, Eagle Pass. Rowell eventually stole second base. With two outs in the inning, Kyle Blevins dug into the batter’s box. On a 0-2 pitch, Blevins singled a line drive to center field to score Crane and Rowell. Brewton led Eagle Pass 3-2 at the end of the fifth inning.

Eagle Pass quickly rebounded in the top of the sixth on a double by Juan Garza and sacrifice fly by Izek Garza to score two runs and take the lead 4-3. Eagle Pass added another run in the seventh inning on a Brewton error to extend the lead 5-3. Brewton was unable to get anything going in the bottom of the seventh.

Crane, Rowell and Flores combined on the mound for Brewton. Rowell suffered the loss. He allowed two runs on three hits, one walk, and struck out four batters.

Omar Salazar was the winning pitcher for Eagle Pass. Salazar allowed one run, on two hits, and struck out four batters.

After a relatively quite first two innings by both teams, Brewton exploded for five runs in the third. Miller Hart singled home Kyle Blevins for the team’s first run. After a Jordan Crane single, two forced errors by Madisonville allowed Hart and Nolan Atkinson to score. Gavin Leggett singled home Crane. After swiping second and third base, Leggett scored on an RBI single by Kannan Carter.

Madisonville scored two runs in the fourth. In the fifth inning, Leggett doubled to center field to score Nolan Atkinson and Jaxson Flores. Madisonville added a run in the seventh inning.

Leggett was 2-for-3 with a double, 3 RBIs, and three stolen bases. Atkinson had two steals and scored two runs. Both teams had seven hits each.

Hart was the winning pitcher for Brewton. He allowed one run, on four hits, no walks and struck out four batters.

Brewton was first to get on the board with an RBI single by Jordan Crane and a steal of home by Nolan Atkinson. Matthews Park rebounded with two runs the following inning on a fielder’s choice and single by Joe William. Singles by Kannan Carter and Kyle Blevins help plate three runs for Brewton in the bottom of the fourth inning to take a 5-2 lead.

Matthews Park loaded the bases with no outs in the fifth inning. Crane was able to force an infield fly at third base for the first out, but an error by Crane the following at bat scored a run for Matthews Park to close the lead to 5-3 in favor of Brewton. Hunter Gibson of Matthews Park followed with a single to left field to score two runs and tie the game at 5-5. An infield sacrifice gave Matthews Park the lead at 6-5.

Matthews Park added another run in top of the seventh to make the score 7-5. With one out, Brewton’s Blevins and Miller Hart recorded back-to-back singles. Atkinson followed Hart with a fielder’s choice to score Blevins but bring Brewton to its final out of the game. After a pitching change, Hayden Odell of Matthews Park was able to record the final out on a strike out.

Brewton had 11 hits. Kyle Blevins was 3-for-4 with a double and 2 RBIs. Armani Diamond and Gibson each had two hits for Matthews Park. Gibson had 2 RBIs.

Crane suffered the loss on the mound for Brewton, while Kyle Blunt picked up the win, and Odell the save. Brewton had six errors in the game.