The lost Alabama towns of the Civil War

By Kevin McKinley | All Things Southern

The War Between the States (Civil War) had the dual effect of altering the fortunes of men and communities alike. Prior to the war, some rural communities experienced the spring time of their existence only to later find that existence cut short by the advent of war and history.

Other small communities prospered for a time after the war due to a variety of reasons and eventually succumbed to other historical, social, and economic effects years later. Still other rural communities were devastated by disease. 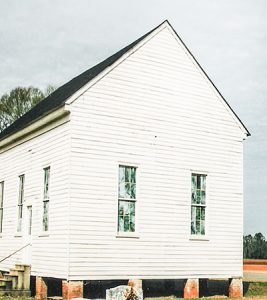 Eliska Methodist Church marks the location of the old community near Eureka Landing in Monroe County.

Many of these tiny communities have long since been forgotten. The following is a brief history of several of these lost communities.

Appleton: Was founded in part by Edmond Steele who most likely served in Tarrant’s Battery of Confederate Artillery. Steele helped found the tiny community north of Brewton along with the Shell, Wilson, Robinson, and O’Bannon families.

Apple growing was an important business in early Appleton and a grading shed was constructed for that purpose. The Methodist had a log church there and a general store served the needs of the local citizens.

The church at Catawba Springs was used as a sort of temporary aid station for injured or sick patients waiting to be transferred to the hospital at Greenville.

Kirkland:  Like so many communities of this era, Kirkland was named for its railroad agent. The coming of the A&F railroad breathed life into this area and gave rise to the community. The community contained a side track for the railroad so that trains could pass each other.

Kirkland had the dubious distinction of being exactly 100 miles from Montgomery along the rail route…therefore the community was for a time called; “One Hundred Mile Siding.”

There was a water tank for the steam engines and for the saw mill as well. The community was founded around 1837.

Due to its position on the railroad, Confederate troops undoubtedly moved through the community and several members of the General Clanton Camp of the UCV resided there according to the camp’s muster roll.

Sardine: This community was named for the bridge that crosses Big Escambia Creek near the area. The community has gone by different names at different times such as Magnolia, and Stanley Crossroads.

Other communities such as Evansville (near Canoe, AL) faded into history in part due to an earthquake that was responsible for drying up the spring there. The old saw mill burned around the same time and many residents moved to the bustling town of Canoe.

Pollard, Alabama suffered from floods, the war itself, yellow fever epidemics, and political battles that removed the county seat to Brewton. Sparta, Alabama (near Evergreen) was raided during the war and had many of its buildings destroyed, including the jail. Following the war the courthouse burned and was thereafter moved to Evergreen.

The memories of these tiny communities have, in some cases, faded into nothing more than shadows and dust. Yet on a warm summer’s day it isn’t hard to imagine farmers breaking the land with a team of oxen or to envision townsfolk sitting on the front porch of an old country store at a tiny country crossroads somewhere in southwest Alabama.