Williams in jail until trial

The East Brewton teen accused in the hit-and-run death of a W.S. Neal middle schooler last February is back in jail.

Donnavia Williams will be tried as an adult in the death of 12-year-old Devon Spencer; however, she has pleaded not guilty to charges of manslaughter, failing to report an accident, leaving the scene of an accident and second-degree assault. 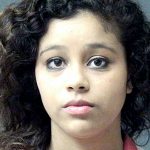 Since her April arrest, Williams has been free on a $150,000 bond – that is, until July 9 after she was again jailed. Court records show Williams was arrested by the Brewton Police Department and charged with minor in consumption.

As a result, her bond has been revoked and she is set to remain in the Escambia County Detention Center until her trial.

No trial date has been announced in the case, court records show.

Spencer – a seventh grader – died on Feb. 16, 2016, from injuries he sustained while walking with a friend from a nearby apartment complex to the W.S. Neal Middle School campus.

In April, Escambia County District Attorney Steve Billy said despite Williams’ age, she should have stopped and checked on the situation.

“(Williams is) bright; knows right from wrong,” Billy said. “We’re not saying this was intentional. She doesn’t get out of the car (to see what was hit). There’s a lot of responsibility in driving a car. At 16 years old, it’s a deadly weapon.”