Wilson awarded employee of the month

Capt. Dusty Wilson with Brewton Fire Department was named the city’s employee of the quarter.

Nine years ago, Wilson was just finishing up college and planned to make a living on the gridiron. 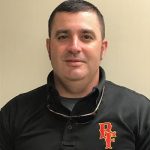 “I played college football for the University of West Alabama and wanted to be a coach,” he said. “But then I changed my mind. It just wasn’t for me.”

So he worked construction for a while and met Amber who would soon be his wife. They came home to Brewton, and he had friends who worked for the Brewton Fire Department.

“They got me interested,” he said. “I would come by and visit, and they told me one day I should join. They told Chief (Lawrence) Weaver I wanted to work there, and he encouraged me to come see him. I went in and we talked and he hired me a few days later.”

On that very first shift, the crew was called out to a structure fire on Pea Ridge Road.

Wilson said he enjoys the adrenaline rush, and the teamwork involved in fighting fire.

“It’s the closest thing to playing sports, and it’s really rewarding work and work that I really enjoy.”

He said managing the crew as captain is a different mindset from charging into dangerous situations as a member of the crew.

“As captain, you don’t get the opportunity to grab a hose and go into a burning structure,” he said. “I’m on the outside looking out for the safety of all my guys as they go in, so it’s different. I just really love to fight fires.”

Wilson and his wife have two children, Karsyn and Karigan. In his spare time, he enjoys spending time with his co-workers as well as hunting and fishing.

Williams in jail until trial