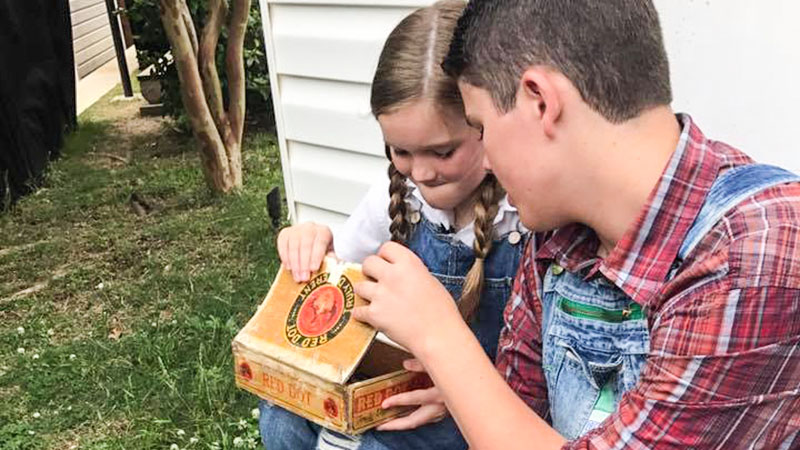 Brewton’s Madelynn Sasser as Scout and Mac Baxter as Jem in the recent ‘Mockingbird’ production.

For the first time ever, Monroeville’s “To Kill a Mockingbird” production will be performed on the Brewton stage.

The Brewton Council on the Arts officially announced its line up Tuesday with the headlining play produced by The Mockingbird Company, a non-profit set up by author Harper Lee shortly before her death for the express purpose of continuing the play in her hometown.

This Monroeville year’s production was directed by Brewton’s Stephen Billy and features this year’s cast, which includes a number of Brewton residents. It will take the stage on Thurs., Sept. 28, at 7 p.m. on the Woodfin Auditorium stage at Coastal Alabama Community College-Brewton.

Stephen Smith with the BCA said the show was made possible through a variety of connections.

“It really helped that (Billy) directed the Monroeville show this spring; made things a lot easier,” Smith said. “We’re very excited to bring the show here. We think it’s going to open up ‘Mockingbird’ to a whole new audience and many who have never seen it before.

“Now that the show is going to be right here in town, there’s no reason not to go,” he said.

The show will feature the majority of the cast from the Monroeville show.

“We’ll have as many sets as we can to make it as real as possible,” Smith said of the production.

But it won’t be the only stellar show sponsored by the BCA, he said.

• “On Golden Pond,” Tues., March 13, 2018. Described as an “American treasure” told on film with Henry and Jane Fond and Katherine Hepburn, it tells the struggle of single family.

“With the known success of the ‘Mockingbird’ show which sells out each year, the season ticket option is not only the best value, but really also the only way to ensure that your seat is available,” Smith said. “We anticipate the season tickets to sell out very quickly, so we encourage everyone to buy early.

Time permitting tickets will be mailed. Otherwise, they may be picked up at the first performance.