The things we leave behind 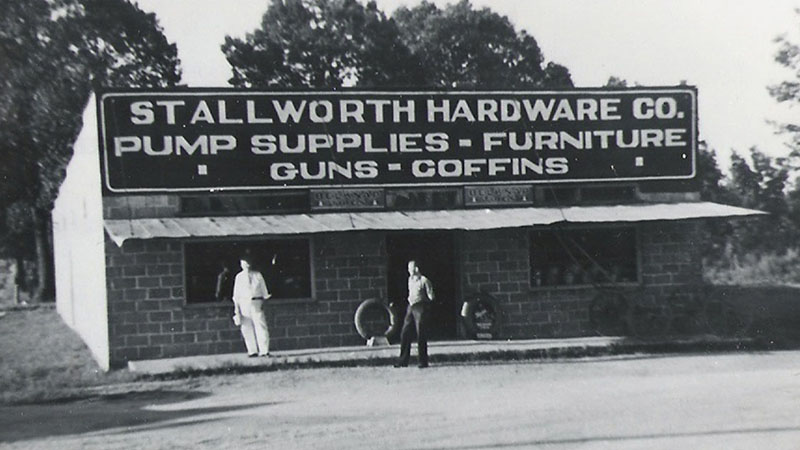 tallworth Hardware left a lasting legacy in the city of town of Canoe, like hardware stores in other small towns.

People leave many things behind them when they pass from this life. It might be brick and mortar buildings, homes, old pictures, memories, children or land. Yet sometimes, years after people are gone, tiny scraps of papers and receipts from purchases made during their lives resurface which give snap-shots of their time spent here. From the discovery of an old ledger book from Stallworth Hardware in Canoe, Alabama, many of these snap shots from the past have emerged.

Hardware stores have always played pivotal roles in small towns. Atmore has had several important stores over the years, Flomaton had Watson-Kline, Brewton had Luttrell’s and Canoe, Alabama had Stallworth’s Hardware.

Jack Stallworth’s hardware store stood on the north side of the L&N tracks at the intersection of North Canoe Road and Lowery Road.

The old hardware store was a landmark for many years. A painted sign on the front of the store read “Guns and Coffins.” Many a traveler on the L&N lines would remember Canoe by seeing the sight of that large, black and white sign along the tracks.

The old building, which was later converted to a shop, is still there today. Yet in the 1930s and 40s it was a major force in the commerce of Canoe.

When found, the old ledger book was tattered and torn and shown every day of its 70+ year existence. In handwritten script, Jack Stallworth had written down the transactions of his customers on a daily basis.

In the front of the book it gives instructions for the potato crop for the year 1942. “When grading begins, be sure to make record of each load as to amount of Number 1’s and Number 2’s. Also, price paid for each load as they come in at the shed(?). Put the number of car they went into and price received for said car. Also record in detail, general digging and hauling expenses per each farmer plus grading and sacking expenses.”

Most of the items in the old book were from the early years of World War II.  Stallworth received a letter dated December 16, 1941 from the Carlot Potato Distributors from Chicago Illinois.

Apparently, the arrival of the war, just two weeks before this letter, had already put a strain on the availability of potatoes for planting in that the letter read; “The supply of good Certified seed does not seem to be very plentiful….” The letter went on to read, “We can furnish you with good North Dakota or Wisconsin Certified Triumphs at $2.50 cwt. delivered to Canoe, Alabama.”

By June 29, 1942, Stallworth was also receiving letters which attempted to sell “War Risk Insurance.” The letter read that when Stallworth purchased his General Motors Installment Plan, the plan did not cover damage to his vehicle due to war.

The policy offer sent to him in this letter offered coverage for a minimum premium of $3.00 or .15 per hundred dollars of coverage. The policy would also cover his home and belongings in the event of enemy attack.  The offer of insurance for war damage, probably issued by the thousands to people all over America, illustrates that in June of 1942, the war’s outcome was anything but assured.

The day to day purchases of the store bring back a list of names from a different generation of Canoe area citizens. Q.E. Wells, Foote Watson, and others were among the countless names in the ledger.

Woodrow Wilson Rowell is listed in an early 1942 purchase where he bought, among other things, 2 “waterers,” 1 bag of chicken feed, 2 cans of paint, and 1 box of pint jars. The ledger kept a running tally of return purchases and monthly or weekly payments of the customer’s bill at the store. Therefore, when Woodrow returned and bought a slop jar at a later date, the purchase and the payment on his balance was so noted. So much for the need for accounting software.

Otis Ray appears in the ledger several times and among his purchases on May 12, 1942 was an oil can for $10, a combination square at $1.40 and a pocket knife for fifty cents.

The ledger also kept records of purchases made by Jack Stallworth as well. One purchase on September 8, 1942 was for a keg of nails from the Andalusia Casket Company, for which he paid $9.00.

Jack eventually ended up in Fort Payne, Alabama where he ran a drug store, which just happened to be across the street from where John and Carolyn Conn were working for a time. All three eventually returned to Canoe. Eventually John Conn purchased the old store and turned it into his shop. For many of the 40 something age range, there are memories of a sign on the back door that said “The Weldery.”

The old block building that was once the scene of many Saturday morning meetings between neighbors as they bought this and that for their weekend projects now sits in silent repose along the CSX rail lines. The old hardware stores of our area; Stallworth’s in Canoe, Watson-Kline Hardware in Flomaton and Luttrell’s in Brewton helped build our towns, but only their memories remain. Yet on dark nights, when the only sound in Canoe is the rumbling of the huge mega-trains which roll down the tracks, it’s easy to imagine the old store coming to life and 1940 era automobiles with men wearing well-worn overalls milling about the site.