Wiley is new director of food, nutrition at DWMMH

D.W. McMillan Memorial Hospital announced that Chef Marilyn Wiley has been named the new Director of Food and Nutrition. Ms. Wiley began work in mid-July taking over from the retiring Joel Bell. 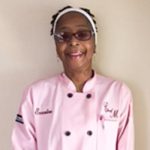 “We are very fortunate to have Marylin join the D.W. McMillan team,” stated Chris Griffin, hospital administrator. “Going forward, we hope that she can add even more positive changes to what we have been doing the last several years for patients and our cafeteria patrons.”

Chef Marilyn received her Food Services Certificate in 1990 through Carver State Technical College. In addition, she received her culinary degree at Culinary School in Hyde Park, NY, in 1992. She also received certification through the Culinary Institute of America in 1992.

Wiley has been employed in the food industry for 40 years. She has taught private culinary classes as well as offered professional mentoring for aspiring chefs. She is the mother of one son and spends her time spoiling her 11-year-old schnauzer (Dax) in her spare time.