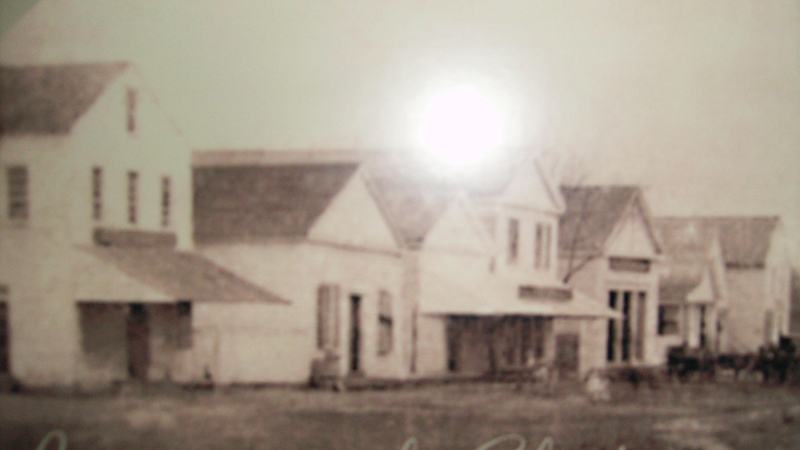 This is a photo of the lost city of Claiborne.

Whether factually based or not, local oral tradition has a powerful effect on culture stories told around a campfire in decades past helped to add continuity to the region and are often passed down to future generations as if the stories were family heirlooms. Such is the southern ghost story, many of which are found in the Southwest Alabama/Northwest Florida area.

One of the oldest communities in Southwest Alabama is Claiborne. The area was once a booming river front town and was almost chosen as the site of the Alabama capital. During Claiborne’s decades of preeminence along the Alabama River, the town witnessed prosperity, growth, decline, disease and war. It was during the war years of 1861-65 that one of the most unusual stories of Southwest Alabama unfolds.

During the closing days of the War Between the States, Gen. Fredrick Steele ventured north from Pensacola with 18,000 Union forces headed to Blakely. Along the way, a contingent of Union raiders under Lt. Gen. Lucas moved into northern Baldwin County and Monroe County.

Lucas’ men delivered many injustices upon the inhabitants of the region. They turned Montgomery Hill Baptist Church into a stable; they stole corn and horses from residents, and they ransacked the courthouse at Claiborne. Local residents were in a rage over the Yankee actions.

While many resigned themselves to their farms, one local teenager, as legend goes, began a one-man guerrilla war against the Union forces. His name was Lafayette Seigler, who was named after French general Lafayette who visited Claiborne in 1825.

People who knew Seigler reported him to be a mild-mannered young man with an even temperament. Yet, Seigler is said to have harbored a dark hateful grudge against the Federal army. The hatred flowed both ways in that after the Seigler began cutting off the ears of bushwhacked Federal soldiers; a Union manhunt ensued for the young man.

Seigler relished in the chase and would often lead the Yankee horsemen on wild runs through the Alabama backcountry on horseback. Seigler is said to have had the fastest horse in Monroe County, and this helped in his escape time and again. Seigler’s tactic was to ride far ahead of the Union troops and then fall back and wait until one of the Federal horsemen fell behind the rest and then he would make his move. More than once a horse without a rider returned to Union lines.

The war ended in April 1865, and it has been said Seigler kept the ears of his victims in a lady’s change purse until his death in the early 20th century. Shortly after the war, strange visions began to appear around the McConnico Cemetery near Claiborne, which was around some of Seigler’s raids.

The first sighting was in the autumn of 1865 by Captain Charles Locklin and his wife. They were passing the cemetery one morning when six Union soldiers on gray mounts passed silently by their carriage. According to their accounts, each horseman wore white gloves and a white bandage wrapped around the head area. The couple was certain these men were ghostly apparitions of Seigler’s victims. Before Locklin could gain control of his terror-stricken horses the men disappeared into the early morning fog. Local legend holds that numerous sightings of the horsemen have appeared over the last 150 years.

Whether such a story is true or not is a subject for debate among readers, yet telling such tales while traveling along Monroe County Road 1 (which is where the cemetery is located) late at night can send a chill up the spine of anyone.

Roads and rivers have served the South as a main artery for settlement and the movement of goods for years. Whereas many of these routes have witnessed the brimming optimism of pioneers headed for a better life, these routes have also witnessed tragedy and extreme distress due to war and other calamities.

During the final days of the War Between the States, the Union army arrived in great numbers. The Union cavalry was tasked with cutting off desperate Confederates who were expected to flee Mobile and head north to Montgomery.

It was a time of woe and want. The corncribs of the Southern nation lay barren; ravaged by a Northern enemy intent upon conquest.

The war ended in 1865 but some believe the war is carried on by ghostly apparitions, which haven’t received word of Lee’s surrender. Around 30 years ago a Canoe resident claims that he and several others were working the woods around Holly Creek cutting fence posts when a strange series of events unfolded.

It was a hot July day and the air was so thick and still with humidity that it was matched only by the thick, still soupy waters of the creek. The men were engrossed with their labor when suddenly a cool breeze began to rustle the underbrush and then the cypress and the pine began to wave as the winds picked up. A feint sound slowly grew until a bugler could be heard along with the gallop of horses. Even though no horsemen were seen the work party quickly left their labor and never returned to this isolated area of the creek.

Could this have been a ghostly cavalry charge from the last days of the war? It is hard to say. Yet historically we do know that a skirmish was fought in the area at the Baldwin/Monroe County line and cavalry from both sides fought in the area throughout the war.

Another transportation route has developed its own ghost story; although some would say it is urban legend. Interstate 65, between the Castleberry and Owassa exit is said to be a haunted highway. One story says more accidents occur along this stretch of interstate than any other stretch of major highway in the state.

In ancient times the area was alive with smaller Native American villages. Many would say these early Americans date to a time before there was any concept of tribes or nations. According to legend, the area between Castleberry and Owassa was full of fresh water lakes and streams, which provided a good, clean environment for the early Native Americans living there. A quarry at Owassa has produced many fine specimens of arrowheads and relics.

Later in history the Creek Indians inhabited the area. In the 1830s the Creeks were forced to leave the area and follow the Trial of Tears to Oklahoma. More than 3500 died along the way.  It is also said that the area between Castleberry and Owassa was an ancient Indian burial site for early Native Americans and later the Creek Indians.

The urban legend is tells that the area is haunted because of the desecration of the grave sites during construction of the road. It is difficult, if not impossible to prove whether the area along I-65 was indeed the burial grounds of these early Native Americans.

The area known as the Southeastern United States has survived wars, a Great Depression, poverty, and a variety of other challenges. Coupled with our strong will to survive as a region, our folk heritage is attached to who we are. Be it the story of a one man’s war against Union invaders, a ghostly apparition of a long ago cavalry charge, or a haunted modern day highway, the Southern ghost story is alive and well.

Sometimes you just have to believe