Speed a plus, experience trouble for middle school Eagles 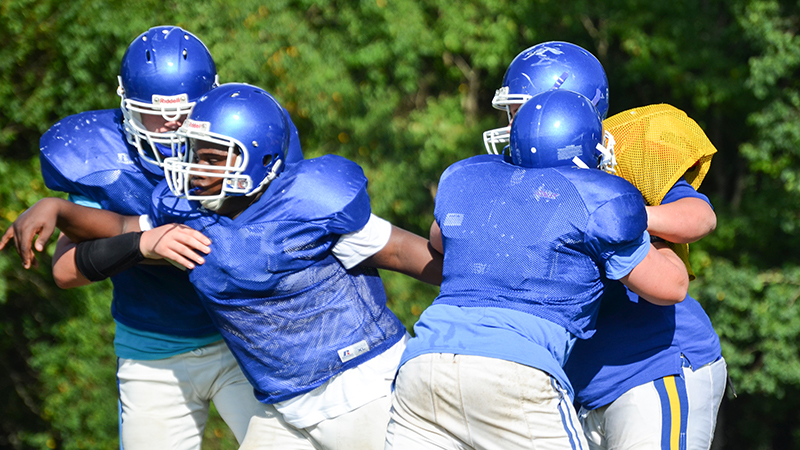 WSNMS defensive linemen make a beeline for the quarterback during drills at practice./ Corey Williams | The Brewton Standard

The W.S. Neal Middle School football team will open its season at home on Thurs., Aug. 31 versus Earnest Ward. Last year the Eagles finished the season 4-4.

Chuck Phillips is approaching his 10th season as head coach of the team. He has an overall record of 60-18.

The team will dress 42 players– 25 eighth graders, and 17 seventh graders.

Phillips said he will rely on his young group to make a difference on the team.

“I’m very impressed with my seventh graders,” Phillips said. “I’m going to count on them more this year than I have in a long time as far as contributing.”

According to Phillips, the Eagles will base out of the I-form formation on offense, but will also run multiple looks as well. Phillips said he has a lot of players returning from a year ago, but very few have experience.

The only position player returning is Dashawn Smith at runningback. Mark Ferguson has been moved to tight end.

Phillips said the offensive line will feature all fresh faces.

“(Ferguson) played guard last year, but will move to tight end. Will have some size but they all have very little experience,” Phillips said.

Alex Alvarez and Tyler Brooks have both shown promise at the quarterback position. Phillips said both players have their upside and are battling for the starting job.

“They are both good players,” Phillips said. “(Alverez) brings speed, while I think (Brooks’) best attribute is his arm strength.

Walker Hoomes and Ruben Fantroy will see time at the wide receiver positions. Both return from a year ago, but will be new to the position. Hoomes played fullback last year, while Fantroy played runningback.

“I have more overall team speed at the skilled positions than I’ve had in a couple years,” Phillips said. “I have four seventh grade runningbacks that can probably play for a lot of  teams. They’re not very big but they can scoot.”

Defensively, the Eagles will run a 50-base defense, which is a five-man front.

“We can get in the 40 (four man front) if we have to,” Phillips said. “It’ll really be based on who we’re playing. We’re not going to be as big as we were last year. We’ll rely more on speed and getting to the ball, instead of just being able to take on blocks.

Phillips said his expectations for the team is just to work hard and get better.

“I don’t know if that will transition to wins,” Phillips said. “The main thing I look for is playing to a standard. We have to worry about what we do. I think if we do what we do, and play to the standard you have to have for winning football, then it should show up on the scoreboard.”

Daniel Hodge will serve as assistant couch. Bryan McCall and Frankie Godwin will help on the staff as volunteer coaches.