Tigers look to another strong year despite inexperience 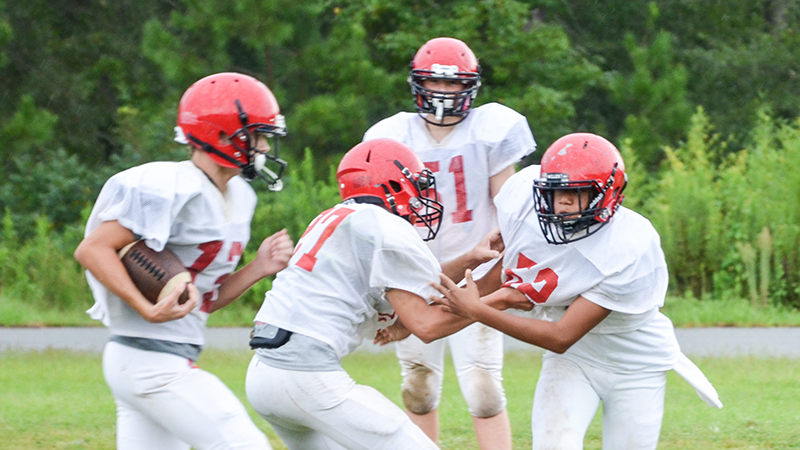 Brewton Middle School football will dress 38 players this season as it prepares for its first game on Thurs., Aug. 31 on the road versus Monroeville. The team will feature 17 eighth graders, and 21 seventh graders.

Last year the Tigers finished 8-1. Head coach Jeff Waldrop will return for a second year. Waldrop said he likes the makeup of his team, but figures inexperience will be a challenge heading into the season.

“Last year’s team set the tone,” Waldrop said. “This year our younger group will have to step in to play a bigger role. Upside, I believe scheme wise we are a little bit ahead than where we were last year. We have a lot of flexibility.”

On offense, the Tigers will be Wing T based, but we’ll have different formations.

Kyle Blevins, who is projected to see time at quarterback, is injured to start the season and will be out a few weeks. Miller Hart will play quarterback.

“(Hart) is a very smart player with a good arm,” Waldrop said. “He makes good reads. He’s a little undersize, but he’s tough as nails. He’s a competitor that I think will be up for the challenge.”

Zodi McMillan will be the lone returner on the offensive line at left tackle.

Starting tailback will be Kannan Carter, he’ll also play outside linebacker on defense.

Waldrop said Carter has never played football before, but his vision is coming around.

Nolan Atkinson will see time as one of the backs.

Waldrop said Trent Cooper will play the utility role on offense and start at corner back on defense. Devin Smith is also a player to watch out for.

“Devin Smith is a good player,” Waldrop said. “He’ll play defensive end and tight end. He has really good hands. We’re looking for big things out of him.”

The Tigers will have a bunch of receivers. According to Waldrop, BMS ran the ball 80 percent of the time last season. The wide receiver group will include Brother Peace, Cooper and Blevins when he returns from injury.

“With our personnel this year, running the ball at a high rate may change,” Waldrop said. “Only time will tell, but I think we’ll be pretty balanced offensively.”

So far Waldrop said he likes what he has seen from his seventh graders, with a few ready to step in to contribute early.

“There are a few seventh graders who are ready to step in, but for the majority it will take time,” Waldrop said. “John Blackburn is one of our young guys who has shown a lot of promise. He’ll contribute a good bit this year. He’s competing for the full back role.”

A.J. Askew will play linebacker and is competing for the fullback spot too.

With good depth for the Tigers, Waldrop said he’s still working on a personnel rotation on both sides of the ball.

“We’re a little different this year than last season,” Waldrop said. “I had 11 guys on offense, and 11 guys on defense and they didn’t come off the field. This year I have more flexibility. It’s a good problem to have.”

Serving as assistant coach for the Tigers will be Benson Stonicher. Stonicher will call defensive plays. Serving as volunteer coaches are Charlie German, William Kyles and Brian Wesley.