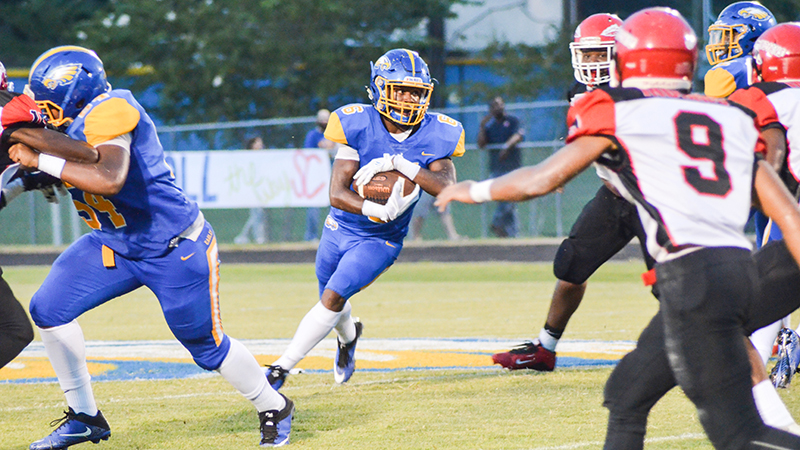 The W.S. Neal Eagles kicked off its season on a positive note Friday with a 21-6 win over the Southern Choctaw Indians.

Neal head coach Andro Williams said his team missed on a couple opportunities to score and made some mistakes but liked the energy from his entire team.

“We will fix the stuff we didn’t do so well heading into next game,” Williams said.

“We’ve just got to work on feeding off of each other,” he said. “We’re going to feed off the JV guys, and we’re going to show those older guys how the JV played. We’re going to let everybody play a role in what we’re doing, everybody, all 45 kids.

“The main thing is we were pretty basic tonight, and we just kind of did our base stuff,” he said. “I just wanted to see who’s going to block and tackle. That’s what we want to see. If we can block and tackle, we feel like we’ll give ourselves a chance.”

Maddox made another big play in open space in the second quarter. Quarterback Jacobey Hawthorne looked to his left to find Maddox. Maddox broke a few tackles to score on a 35-yard reception. Bartolucci added the PAT, and Neal extended its lead 14-0 heading into the half.

At the 8:01 mark in the third quarter Southern Choctaw got on the board in a big way. Junior tailback Deontae McGrew broke free of Eagle defenders for a 71-yard touchdown run. Southern Choctaw failed on the PAT, making the score 21-6 in favor of WSN.

With 2:38 left in the third quarter, junior Noah Hill powered his way into the end zone for a two-yard touchdown to extend the Eagle lead. Bartolucci added his third PAT of the game to make the score 21-6.

The junior varsity teams of both school played out the fourth quarter. Southern Choctaw threatened to score with first down and goal from the 5-yard line. Neal JV went beast mode and allowed nothing to force a turnover on downs. The Neal offense took over on downs on their own 5, and drove down the field consistently, keeping the ball the entire rest of the quarter.

“I like (the JV team’s) energy,” Williams said. “(Energy) and having fun playing the game is what we’ve been harping on. It’s amazing. It’s times we look like we sort of just don’t know how to have fun playing the game, and those JV guys came out ready. I told the seniors, they’re just laying the foundation for where we’re going. The JV guys are the ones that’re going to grasp whatever they show and go with it. They understand what I wanted, because they came out here and got after it.”

The Eagles will play Tallassee at home this Friday. Tallassee defeated Russell County 21-14 in Week No. 1.

Kick off in East Brewton will be at 7 p.m. Weather is expected to thunderstorm with a high temperature of 84 and low of 71.