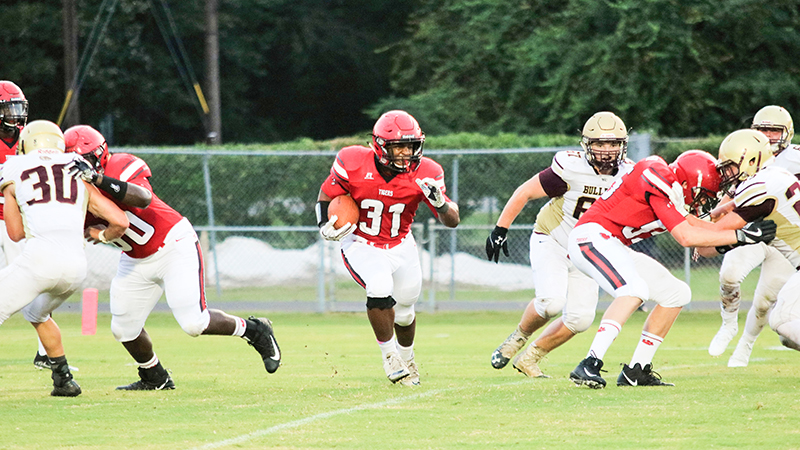 The T.R. Miller Tigers offense were hitting on all cylinders with the rushing game, while the defense held the Washington County Bulldogs to 106 total yards in a 41-0 thrashing on Friday.

TRM head coach Andrew Thomas said his team played really physical, something he and his coaching staff have preached heading into the first game.

“We’re going to have some mental mistakes, there’s a lot of new players and a lot of the scheme changes, so there’s a learning curve there,” Thomas said.

“The biggest thing is we’re going to be active and physical and I thought we did that. In fact, when we started to get things going we finished. Last year at times we would look good and have things rolling then we’d hit a wall. I liked the fact we kept getting after it, expecially on the offensive side in the first half. We talk a lot about trying to beat teams in the second half. We’re going to have to keep grinding moving forward. Very, very pleased of the effort and physicality we played with.”

Senior DeMarquis McMillan made his debut from a season ending injury a year ago in a big way with a 56-yard touchdown run in the first quarter. TRM kicker Matthew Morgan added the PAT to give the Tigers a 7-0 lead.

The second quarter was full of big plays for the Tigers. On third and seven-yards to go, senior Michael Campbell used his shiftiness to break for a 40-yard touchdown run.

On first and ten, the Bulldog quarterback dropped back and launched a pass deep for a receiver. Instead the ball fell in the hands of Miller’s Hunter Johnson. On the ensuing drive TRM quarterback Joshua Jolly faked a handoff to McMillan on a quarterback read play. Jolly kept the ball and took off for a 51-yard touchdown down the sideline. The Tigers scored another touchdown on a 47-yard run.

TRM added another big play on a jet sweep from Jolly to sophomore wide receiver Chino Fernandez. Fernandez broke a tackle and ran the ball for 31-yards to set up a 21-yard touchdown run by McMillan. Morgan added his fifth PAT to make the score 35-0.

Darius Webb put the finishing touches on the win with a 50-yard touchdown to make the score 41-0. TRM failed to score on a two-point conversion.

“I thought both our quarterbacks (Jolly and Stokes Jennings) were able to manage and run the offense,” Thomas said. “We didn’t throw the ball, something we’ll look to moving forward, but we got into a rhythm running the ball. That’s how we’ll go throughout the season. It’ll just depend how the game goes. The biggest thing is that both get comfortable in the system. Pleased with both of them. Our offensive line blocked pretty well,” Thomas said.

“A lot of new players stepped in upfront, and I thought they did a good job creating openings for the big plays we picked up.”

TRM will travel to play the Opp Bobcats on Friday. Opp defeated the Tigers 30-20 last season. Opp returns this season after winning the Class 3A Region 2 championship a year ago. Opp is coached by third year head coach Brent Hill.

Weather is expected to thunderstorm with a high of 85 and low of 71.