Jason Windham, son of Jerry and Jean Windham of Brewton, was recently awarded a master of science in nursing with a concentration in adult-gerontology acute care nurse practitioner during the Summer 2017 Commencement of The University of Alabama at Birmingham on Sat., Aug. 12. 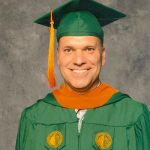 He is a 1990 graduate of W.S. Neal High School. While at UAB, he maintained a 4.0 GPA throughout the master’s program. He plans to remain employed at UAB Hospital.