Jessica Brooks is the head teller at Regions Bank, and has worked her way to that position, being named head teller in February 2017.

Her duties, in some ways, have not changed too much, but with the promotion comes several new responsibilities. 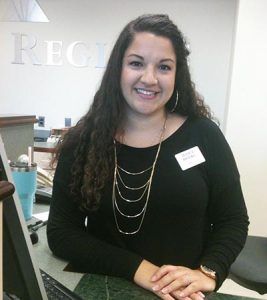 She first got into banking the year after she graduated from T.R. Miller High School in 2007 when she was hired at Bank of Brewton in 2008. She was there until she was offered her present position at Regions Bank.

“The banking business has changed a lot,” Brooks said. “Technology has taken many jobs away. Fewer people are needed to do the work.”

When she first came to Regions she was named the vault teller and then later she became the head teller.

“I keep records in order and am there for the other tellers,” Brooks said. “I am over the ATM machine and have to be able to go to meetings, such as attending a meeting in Mobile for head tellers once a month at the RSA Tower.”

Brooks was born in Sarasota, Fla., and then moved to Minnesota, because her dad moved a lot due to his job.

“My mom hated the cold weather, and when my dad was offered a job in the south, my mom told him to take it because she was tired of the cold,” Brooks said.

That is the way the family found themselves here in this area when Brooks was eight years old.

“My parents actually moved to Brewton because of the school system,” she said. “They had heard of the Brewton school system and thought it would be better to send their children to school here.

“We moved when Mom was seven months pregnant with my little sister.” she added. “They moved with one child, another one about to be born, one dog, two cats and a hamster.”

Brooks graduated from T.R. Miller High School in 2007. While she was in high school, she was already looking toward the future by working at Burger King.  After high school, she kept her job there and got a second job at Movie Gallery until she was hired to work at the bank.

She is now busy with her job and her seven year old son, Karson, who is a student at Brewton Elementary School. The family lives here in Brewton.

“I love it here,” she said. “The people I work with are very family oriented. We have quarterly get-togethers for dinner and we stay in touch with other workers.”

Brooks said she is happy spending time with her son. He loves the splash pad going out to eat with friends or going to the movies.