A Flomaton woman was jailed last week after a traffic stop revealed she was allegedly using methamphetamine. 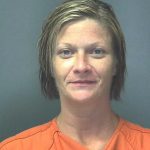 Chief Deputy Mike Lambert with the Escambia County Sheriff’s Office said Bethanie Cash Ward, 40, was stopped on Aug. 24 at approximately 11 a.m. on Old Atmore Road. Ward, who was driving a black BMW, was pulled over after a deputy observed her crossing the centerline, Lambert said.

“As deputies spoke with her, they asked her if they had consent to search the vehicle, and she consented,” Lambert said. “Deputies then found two packages containing what was field tested positive as crystal meth in her possession.”

Ward was charged with possession of a controlled substance and possession of drug paraphernalia. She was booked into the Escambia County Detention Center and released on a $5,000 bond.