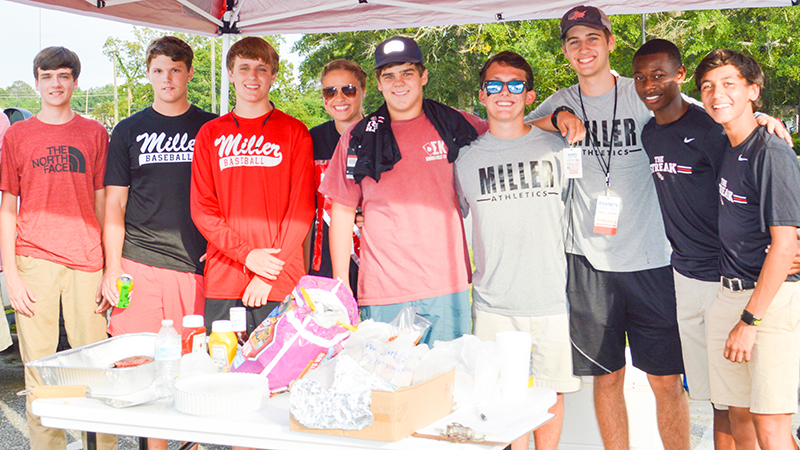 Now that’s the spirit! Students at T.R. Miller High School are joining together to show their support at TRM athletic events. The group, known as The Streak, is an idea originated by TRM senior Nelson Martin.

“I’ve always wanted to have a student section,” Nelson said. “I’ve gone to Alabama and Auburn games, and they’ve always had a really big student section. They have fun with it. Since I’ve been here we’ve never really had that. There hasn’t been much spirit, so I wanted to start it.”

After ironing out the details of his plan earlier this summer, Martin enlisted the help of his fellow classmate and friend Garrett Cave to take his idea a step further.

“(Cave) is my technical design guy,” Martin said. “I can give him an idea of what I want, and he brings it to life. None of this is possible if Garrett didn’t bring it to life.”

Cave said he does all the design and social media work, while Martin handles the organization and ideas.

“I think there are a lot of people that have wanted to get involved and do more at athletic events, but there never has been as much organization,” Cave said. “I think that’s the main reason Nelson came up with the idea because he wanted more enthusiasm from the stands. I think the response has been good. Hopefully, more and more people will join as the season moves along.”

Students choosing the $15 perk will receive a cowbell, shaker and entry pass to exclusive events, such as the tailgate at home football games.  The $25 option will include the same perks plus a The Streak Nike Dri-Fit t-shirt.

“Anybody can sit in the student section, there will just be some stuff exclusive to people who have bought the membership, like the tailgate,” Cave said.

Currently there are 45 members. The Streak will be active for football, volleyball, basketball, softball and baseball games. There is no deadline to join.

“We’re always open to selling membership, “ Martin said. “I want everybody sitting in the student section. “

The group has over 20 sponsors including RedZone Weather, Jus Do, David’s Catfish House, Popeye’s and the Brewton Police Department.

Martin said his idea wouldn’t be a reality without the help of a lot of people.

“My friends have been a lot of help spreading the word and getting students involved,” he said. “(Melanie McGougin) of Jus Do helped me with the business side. Spinks Megginson has been a motivator and inspiration whenever we got down and felt the project wouldn’t get off its feet.”

Moving forward in its inaugural year, Martin said he hopes The Streak will start a new tradition at Miller.

“I hope that students will go to The Streak during games to show support for Tiger athletics,” Martin said.

To join The Streak visit thestreaktrm.com.

For any questions, or to find out about upcoming events contact thestreak@gmail.com.