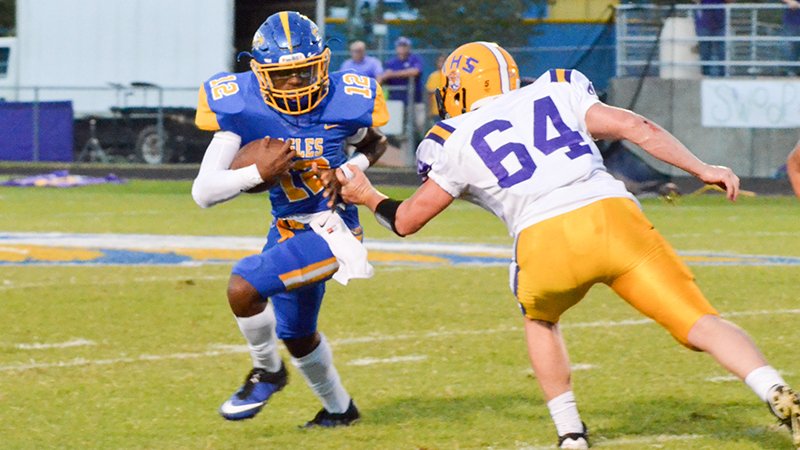 W.S. Neal quarterback Jacobey Hawthorne scrambles to the outside versus Tallassee./ Corey Williams | The Brewton Standard

It was a physical game between the Tallassee Tigers and W.S. Neal Eagles on Friday. In the end, it was the Tigers who rose to a 28-13 win behind a 138-yard, three touchdown rushing game by senior quarterback Casey Baynes.

The Eagles struck first late in the first quarter when senior duo, quarterback Jacobey Hawthorne connected with runningback, Marvin Maddox for a 20-yard touchdown. Neal added the PAT to take a 7-0 lead.

With 11:12 to play in the second quarter, Baynes found an opening on a quarterback run to the left side good for a 25-yard touchdown. Tallassee added the PAT to tie the game, 7-7.

Neal threatened to score with 1:38 to go in the quarter, but the Tallassee defense was able to force a fumble inside the 5-yard line. The game remained tied 7-7 at halftime.

With five minutes to play in the third quarter, Tallassee opted to run a power play to the left with junior runningback Eryn Cochran-Gill. Gill broke a few tackles before sprinting free for a 37-yard touchdown. Tallassee added the PAT to take a 14-7 lead.

With 11:26 to play in the fourth quarter Tallassee extended its lead even further on a 12-yard touchdown run by Baynes. With the added PAT, Tallassee led 21-7.

The Eagles responded four minutes later when Maddox weaved his way down the seam of the field for a 26-yard touchdown. Neal missed the extra-point right, making the score 21-13 in favor of Tallassee.

With the game still in any team’s favor, Tallassee had perhaps its biggest play of the game. On third down and seven yards to go, Baynes looked to his right to find teammate Markevious Matthews in the flats. Matthews was able to avoid defenders and tot the pigskin for a 40-yard gain, and inside Neal’s 25-yard line. Baynes closed out the drive with a 22-yard touchdown run. Tallassee kicker, Quinton Jeter connected for his fourth PAT of the game to make the score 28-13.

Neal drove to Tallassee’s 14-yard line on the ensuing drive, before ultimately turning the ball over on downs. The Tigers ran out the rest of the clock for its second victory of the season.

WSN head coach Andro Williams said his team fought hard until the final second but feels there were some missed opportunities to capitalize on.

“It was a battle and the kids fought to the end,” Williams said. “That’s what we want. We missed some opportunities. I think in the first half we had a great opportunity to take control of the game. I thought we were hesitant in some areas at times but we have to make some adjustments. We’ll get better and it starts with me. We’ll fix all the small mistakes that we had and we’ll come back and go to work from there.”

Tallassee had 228 rushing yards for the game. Cochran-Gill had eight carries, 44 yards, and a touchdown. Baynes was 3-for-3, for 63 yards passing.

WSN will travel to Thomasville on Friday.