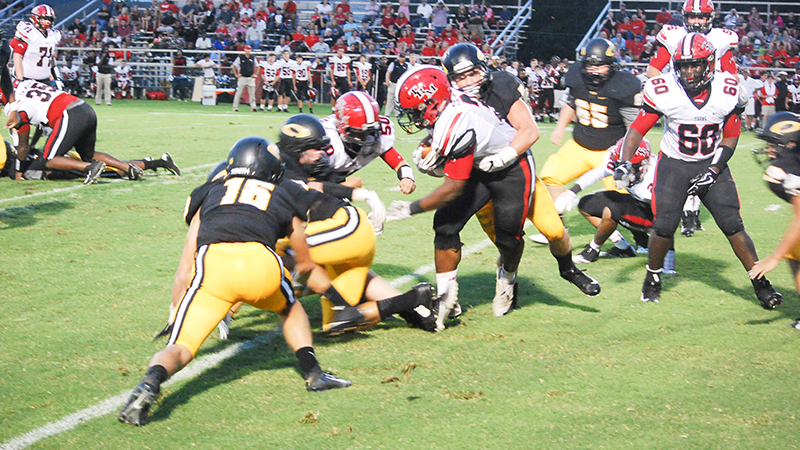 The T.R. Miller Tigers were led by a five-touchdown performance by senior running back Demarquis McMillan to defeat the Opp Bobcats, 54-0 Friday night at Channell-Lee Stadium in Opp.

It was a reversal of fortune for the Tigers this year, after dropping their opening matchup versus the Bobcats last year.

The Tigers wasted no time getting on the board first.

After the Bobcat kickoff put TRM at their own 30-yard line, quarterback Stokes Jennings threw a pass to the left side off of a play-action to McMillan, who then turned on the jets for a 70-yard touchdown, giving the Tigers a 7-0 lead.

The Tigers then forced a fumble on Opp’s first drive, and used eight run plays to get to the Opp 27.

A false start pushed them back and Opp forced a punt.

The punt was eventually blocked by the Bobcats’ Shawn Tillis, and gave Opp good starting field position at their own 40-yard line.

The Tigers’ defense clamped down to force a quick three-and-out, and a punt put them at their own 21-yard line with 2:54 remaining in the first quarter.

T.R. Miller took over from this point in the game.

A 10-play drive was eventually capped off by McMillan’s second touchdown, a 7-yard rush to put the Tigers up 14-0.

A second straight three-and-out by the Bobcats ended in a 32-yard punt return by Matt Smith, which put the Tigers at the Bobcat 8-yard line to start their drive.

The third play of the drive was good for McMillan’s third touchdown, a one-yard run up the gut to put the Tigers ahead 20-0 with 5:30 left in the second quarter.

After a third straight Opp punt, it only took the Tigers two plays to find the end zone again.

A 73-yard run by Michael Campbell was capped off with McMillan’s fourth touchdown of the first half, a 12-yard score as he barreled over two Bobcat defenders at the goal line to send the game to halftime with the Tigers leading 27-0.

The Bobcats caught a break to begin the second half, as their first drive was only three plays, but T.R. Miller would inadvertently touch a punt rolling on the ground, that Opp would recover at the Tiger 37-yard line.

After a 5-yard run by Dacarmeyen Hines, the second-down snap was fumbled by the Bobcats and recovered by the Tigers at their own 33-yard line.

A 57-yard run by McMillan allowed Campbell to punch in his first touchdown of the year on a 6-yard run.

McMillan’s fifth touchdown came on a 36-yard run in the third quarter after Opp fumbled a handoff.

Orlando Gandy would eventually run in a touchdown of his own, and a fumble recovery by Earl Dolihite in the fourth quarter would end the game’s scoring.

Tiger head coach Andrew Thomas said he felt his boys were ready for the game all week.

“They had an edge about them this week,” Thomas said. “I couldn’t be more proud, but there’s still room to improve. It’s a big win, especially in the fashion the boys did it in, coming in here.”

Opp head coach Brent Hill expects his team to be ready next week.

“We won’t forget this score,” Hill said. “This will not define us. We will be back.”

TRM will travel to Cottage Hill this Friday.