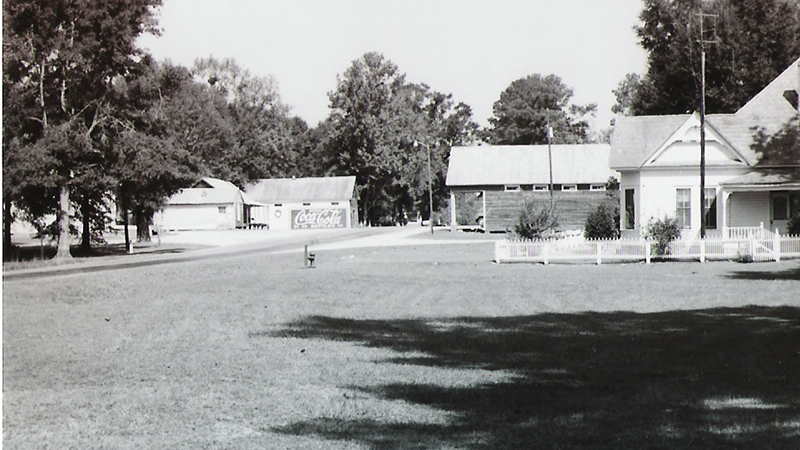 Burnt Corn is a tiny hamlet that has seen the full panorama of state and national history.

Burnt Corn is a tiny hamlet that has seen the full panorama of state and national history. From its earliest days to the present, the town has felt the reverberations of history, from frontier outpost, to growing commerce center, to the present day sleepy community just northeast of Monroeville. The community has been on the apex of unfolding historical and political events.

Many notable personalities traveled through what was called Burnt Corn Springs during the early days of Alabama. Andrew Jackson traveled the area on his way to the Battle of New Orleans. Francis Scott Key also traveled through the town. Aaron Burr was transported through the town on his way to trial for treason in Virginia. During the early years Native Americans and local settlers intermarried and lived in harmony with one another in and around the town. Stage coach travelers would spend the night in the town and it has been said that the old store in Burnt Corn was actually a hotel.

Around this period Monroe County was formed, making it the first county in the state. The boundaries were taken from Creek Indian hunting lands that were ceded after the Treaty of Fort Jackson. Postal service to the town began in 1817. After the county was formed, a great influx of settlers came to the area. Burnt Corn was the first town in the area in that it was situated along the Old Federal Road which connected the Alabama Frontier to Georgia. As “Alabama Fever” swept the east more and more settlers came to the area. more settlers arrived. Among those was Isham McKinley who had a post office address at Burnt Corn according to the 1820 Census.

Burnt Corn during this era was a center of intellect and refinement in Alabama. Dr. John Watkins, who was one of the drafters of the Alabama Constitution, lived in the town and maintained his doctor’s office along the Old Federal Road (now called Old Stage Road. The old office is still there). Dr. Watkins was the only doctor between Mobile and Tallahassee, Fla., during this era.

During the Mexican War of the 1840s, American troops marched through the town on their way to New Orleans to board ships for Mexico. It was during this period (1840-1900) that the town’s golden age began. Grist Mills, schools, churches, a Masonic Lodge and various other businesses and organizations began to arrive in town. In the midst of this golden era (1861-1865) the Civil War came to the town in a big way.

Confederate troops en route to Virginia and points north moved through the town on horseback and on foot during the war. The old men of the town would gather at the general store during the war where they would enlist the aid of a Mr. Cunningham, who was literate, to read the news from the war. During the later days of the war, raiders and pillagers from the Union army arrived in town.

In April of 1865 Union troops, operating on a tip that a local man had a large supply of cash and gold, came to the house of Mr. John Preyear. The soldiers confronted the man about the presence of the money and insisted he give up the gold and cash. He refused (legend has it his girlfriend hid the money) and was summarily hung. The Union soldiers apparently did a poor job of hanging Preyear because he survived the hanging and was cut down from the tree.

Among the Confederate veterans who returned from the war was Pvt. William Fowler who fought in Co. I of the 15th Confederate Cavalry. His unit and the 15th fought in the Southwest Alabama and the Northwest Florida region. Surely men like Mr. Fowler were proud to return to the booming little town after the war. Older citizens of the area like Isham McKinley (who was born in the 1770s) had to marvel at how in the brief span of 50 years the town had evolved from frontier outpost, to boom town, to the cross roads of a major war.

In modern day Burnt Corn, when the gentle autumn breeze stirs, it moves the imagination to days gone by and reminds the visitor of the lives of settlers and citizens whose time has long since come and gone.

Today Burnt Corn is located off of the highway route between Monroeville and Greenville. Coming around the square take a right at the northeast corner of the town square and follow to the Peterman cut off. A driving tour of the community is well worth the time and effort.