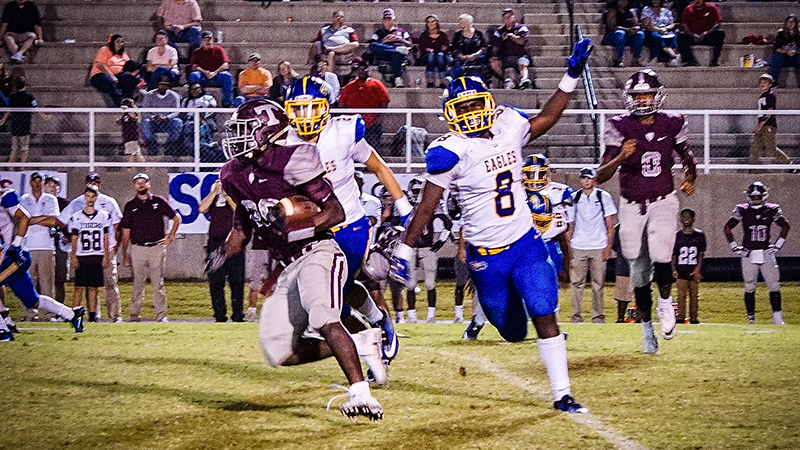 A Thomasville ball carrier looks for room to run as the Eagle defense tries to make the tackle./ Heather Stone | The Brewton Standard

Scoring two quick touchdowns near the end of the fourth quarter couldn’t pull W.S. Neal out of a 19-36 loss to the Thomasville Tigers on the road Friday night, giving the Eagles an 0-2 start to the season.

Neal kicked off to Thomasville to begin the game, and the Tigers took only three plays to score on a 41-yard pass from Corrigan Thibodeaux to Bralen Washington.

In the next two series, both teams gained only six yards each and went three and out, but senior Marvin Maddox exploded on the Eagles’ next possession, running 55 yards for a touchdown and tying the game 6-6 with 5:32 left in the first quarter.

Thomasville answered immediately, with a 42-yard run that set up a 20-yard rushing touchdown by Jacquez Ausbon. The kick was good, and the Tigers moved ahead 13-6 with 5:02 still to play in the first quarter.

Despite a bad snap for the Eagles giving Thomasville great field position on Neal’s 27-yard line, the Tigers were not able to score a touchdown. After a 10-play series, the Tigers settled for a field goal on a fourth and goal from the four yard line, increasing their lead to 16-6 with 10:41 on the clock in the second quarter.

A fumbled kickoff return by Neal set the Tigers up with great field position again, a first and goal on Neal’s 10 yard line. Thomasville scored a touchdown on a two-yard run by Ausbon with 9:29 left in the half.

Neal held the ball for the next eight and a half minutes, but despite three first downs, a couple of good runs, and a 13-yard pass from senior Jacobey Hawthorne to senior Matt Hutchins, the Eagles came up one yard short of a fourth first-and-ten, turning the ball over on downs at Thomasville’s 27 yard line with 1:02 to go until halftime.

The Tigers scored again on a 78-yard pass from Thibodeaux to Javien Johnson, going up 30-6 with 17 seconds until the buzzer to end the half.

The Eagles received the kickoff to start the third quarter, but were forced to punt it away. Neither team scored again until Thomasville quarterback Thibodeaux ran in an eight yard touchdown with less than two seconds left in the third. Neal tipped the PAT, preventing the Tigers from scoring the extra point, moving the score to 36-6.

Both teams punted once more before freshman Eagle Isaac Bonam rushed for an eight-yard touchdown with 5:30 to play in the game, closing the gap in the score to 12-36.

Thomasville was unable to score on their next possession, turning the ball over on downs at Neal’s 42 yard line. Facing a second and 10, Bonam once again scored for the Eagles on a 58-yard run. Senior Tommaso Bartolucci’s kick was good, making the score Neal 19, Thomasville 36 with 2:29 left in the game. The score proved the final of the game.

WSN head coach Andro Williams said his team has to learn how to keep battling to win.

“Either I’ve got to do a better job of getting them prepared, or we didn’t have any guys to step up and challenge these guys tonight,” Williams said. “Thomasville is a team that knows how to win. We preached about that all week, and we’ve got to come out and take initiative and take care of our business. We’ve got to find people who can bow up and accept the challenge of the fight. We have to come to fight. That’s where we’re at. We’ve got to go from there.”

The Eagles will play Satsuma at home this Friday night. Kickoff is at 7 p.m.