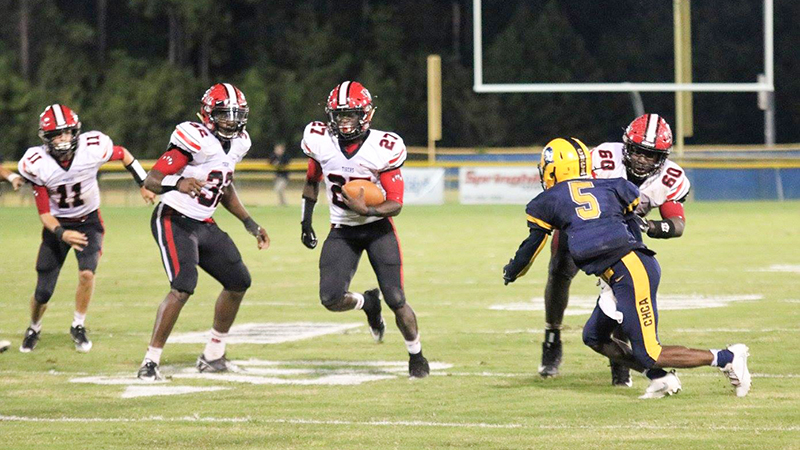 It was a back-and-forth battle down the stretch in an area matchup between the T.R. Miller Tigers and Cottage Hill Christian Academy Warriors Friday. In the end, the Tigers made more plays and finally capped off a 40-34 overtime victory with a fourth and goal run up the middle by DeMarquis McMillan.

“We knew Cottage Hill would be a good squad,” said TRM head coach Andrew Thomas. “They have some good players. I’m just proud the way the kids kept fighting. We didn’t play our best on either side of the ball. Special teams was really good for us. We played extremely well in our cover game and making two field goals was huge for us.”

The Tigers entered the fourth quarter with a 24-20 lead. Cottage Hill quarterback Kristopher Nezat connected with a receiver to give the Warriors back the lead. The added PAT made the score 27-24 in favor of Cottage Hill.

Cottage Hill had the ball again on offense and had a good opportunity to put the Tigers away, but TRM forced a fumble on the Cottage Hill 20-yard line. On the ensuing drive running back Narkavius Campbell found open space to score on an 18-yard touchdown. The Tigers added the PAT to take a 31-27 lead with 1:01 seconds left to play in the game.

Cottage Hill took over on its 20-yard line to start its drive. The Warriors drove the length of the field in a matter of seconds on an 18-yard pass, facemask penalty, and 36 yard pass for the touchdown. The added PAT gave the Warriors a 34-31 lead with 40 seconds left to play in the game.

After a good kickoff return by Jalen Walker, the Tigers started its drive on the Cottage Hill 40-yard line. A defensive pass interference on a great catch by Michael Campbell put the Tigers within field goal range. On to the field came Tiger kicker Matthew Morgan. Morgan missed a kicker earlier in the game. With 4.8 seconds to play, Morgan’s 30-yard field goal attempt hit the upright of the post before falling through to tie the game, sending the game into overtime.

Cottage Hill received the ball first in overtime. The Tiger defense stood tall, forcing the Warriors to try a field goal attempt. The field goal attempt was unsuccessful giving the Tigers a chance to win the game with either a field goal or touchdown. After losing four yards on its first play, the Tigers ran a bootleg with quarterback Joshua Jolly. Jolly picked up 14 yards. On the next Tiger play, Campbell was stopped short at the goal line. On fourth and goal and the game in the balance, the Tigers opted to go for the touchdown. McMillan, who at that point had eclipsed the 100-yard mark for the second straight game, punched in the winning touchdown in the endzone to the cheers of Tiger fans.

Thomas said despite some miscues, the Tigers were able to step up when it mattered.

“When it came down to the end we were able to make a play,” Thomas said. “That’s a big confidence boast. Pulling out a win like this helps us as we move forward. If we get in tough situations we can look at this game. We know how to overcome, to keep battling and not panic.”

Nezat of Cottage Hill was 14-for-20 passing with 241 yards and five touchdowns.

The Tigers will host Hillcrest (2-0) this Friday.

Thomas said Hillcrest is a very talented team that has improved from a year ago.

“(Hillcrest) is a lot better defensively,” Thomas said. “They have good receivers and guys that run the ball. The quarterback is big and can throw it. They’re a threat every play to score. They’re a team playing hard, fast and physical on defense. We got our hands full. It’s going to be a tough one.”