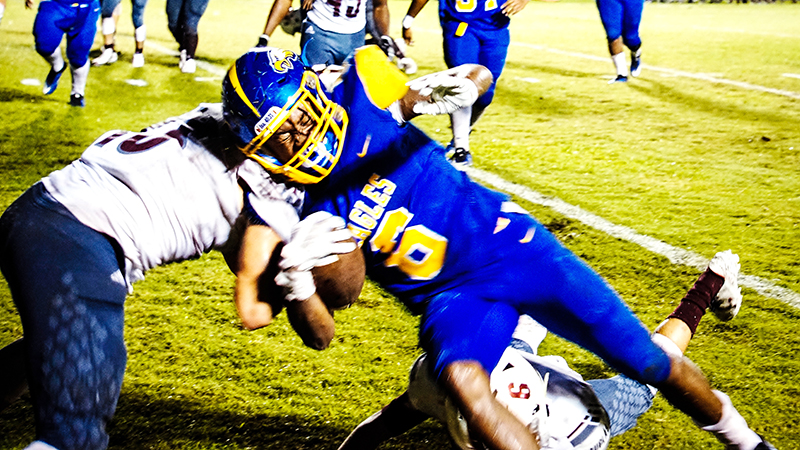 The energy on W.S. Neal’s sideline was high Friday night while Eagle fans braved the rain to cheer for their team in a high-scoring game at home. Neal battled the Satsuma Gators and the elements to pull off a 41-32 win in an exciting match up. The win moved the Eagles to 1-2 on the season and 1-1 in region play.

The Eagles kicked off to the Gators to start the night, forcing a punt on Satsuma’s first series. Neal also punted the ball to end their first possession, but then the touchdowns started coming, with the Eagles scoring on six out of eight drives, and the Gators scoring on five out of nine.

The first points in the game were earned by Satsuma with 5:32 on the clock in the first quarter when Steven Moon made a six-yard run into the end zone. The PAT was no good, but the Gators were up 6-0. This was the only time they would lead all night.

Neal answered quickly with freshman Isaiah Bonam scoring on a five-yard run with 3:16 left in the first. Fellow senior, Tommaso Bartolucci, kicked the football through the uprights for the PAT, putting the Eagles ahead 7-6.

It looked as if Satsuma was heading right back into the end zone on their next possession. The Gators made a couple of big runs before senior Jacoby Hawthorne intercepted a pass deep in Eagle territory. This started a series that lasted more than six minutes and ended with Hawthorne sprinting 19 yards for a touchdown. Bartolucci’s kick was once again good, and the Eagles increased their lead to 14-6. Just one minute later, with 7:58 left in the half, Moon scored for the Gators again on a 23-yard run. The PAT was no good, but Satsuma closed the gap to 14-12.

Five plays later, and helped by a 53-yard sprint from Hawthorne, Bonam crossed the goal line again on a two-yard run, with 5:20 on the clock in the second quarter. Bartolucci’s PAT found its mark once more, moving Neal further ahead to 21-12.

There was time for two more touchdowns before halftime. The Gators scored on a 5-yard run, but Neal blocked the PAT and then needed only two plays for senior Marvin Maddox to break free for a 40-yard touchdown run as the rain began to pour in earnest. Neal’s PAT was once more good, moving the score to 28-18 for the Eagles with 2:04 left in the half.

The Eagles forced Satsuma into a three and out, and then facing a fourth down themselves, took a knee to end the second quarter. Neal racked up 255 rushing yards in the first half to Satsuma’s 227 rushing and nine passing.

The Eagles received the ball to start the second half of the game and resumed the offensive shootout, scoring on a 54-yard run by Maddox and another PAT from Bartolucci, pulling away 35-18 with only 2 minutes, 15 seconds having ticked off the clock in the third quarter.

It looked as if Hawthorne had recovered a fumble he forced on the Gators’ next series, but the referees ruled the carrier down before the ball came out, and Satsuma’s drive continued, to a 20-yard scramble into the end zone by quarterback, Markiese Pickens. The Gators, having missed every PAT all night, attempted a two-point conversion, and made it, moving the score to 35-26 with 7:48 on the clock in the third.

Neal controlled the ball for almost all of the remaining time in the third quarter, eventually turning it over on downs, but having run precious minutes off the clock. The Gators were able to score again on a four-yard run, but missed the PAT, leaving them just three-points behind the Eagles, 35-32, with 11:08 to play in the fourth quarter.

Neal held on to the ball once more for a large chunk of the final quarter, scoring on a four-yard run by Maddox, and leaving only 3:01 on the clock, putting the score at 41-32. Satsuma was unable to maintain their next drive when the Eagle defense sacked their quarterback twice in a row. With less than a minute left to play, they turned the ball over on downs to Neal, allowing the Eagles to make a couple of plays and then take a knee, ending the game with a 41-32 win.

When asked about the increased energy on the sidelines this week, Williams commented, “We’re going to continue to talk about it. We’ve still got to get better. We’re going to get more. I guarantee you. That’s the only way I know to do it. We’re going to appreciate the opportunity we have, and come out here and compete and have a good time. That’s what it’s about.”

Neal had 401 yards of total offense on the win, while Satsuma had 303 total yards. Maddox was the Eagles’ lead rusher with 235 yards on 16 carries. Hawthorne had 72 yards with seven touches, and Noah Hill contributed 66 yards on 10 carries.

Next up: The Eagles play Calhoun for Homecoming this Friday night. Homecoming festivities begin at 6 p.m, and kickoff is at 7 p.m.

TRM XC ‘toughing it out’