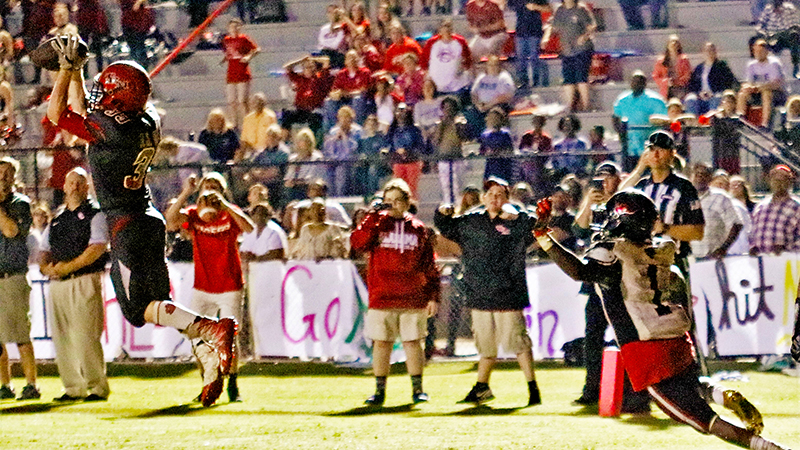 It was pandemonium after Hunter Johnson’s interception in the T.R. Miller end zone capped off a fourth quarter comeback over Hillcrest High School, leading the Tigers to an 18-15 win Friday.

The eighth ranked Tigers welcomed the 10th ranked Hillcrest Jaguars to Municipal Stadium for a 3A matchup that did not disappoint.

The defensive battle didn’t see a score until the second quarter, when the Tigers’ star running back DeMarquis McMillan ran a 22-yard touchdown to give T.R. Miller a 7-0 lead.

The Jaguars answered back with a score of their own, on a 1-yard run, followed by a 2-point conversion, giving Hillcrest an 8-7 lead heading into halftime.

In the third quarter, defensive stands by both teams kept the game where it was.

The biggest stop in the third quarter came with four minutes, as the Jaguars pushed the ball to the T.R. Miller 5-yard line and had first and goal.

The Tigers stomped out the threat, forcing an incompletion on fourth down and keeping the score at 8-7 with three minutes remaining in the third quarter.

The fourth quarter was opened by a Jaguar drive that was capped off by a 23-yard touchdown pass, extending the Hillcrest lead to 15-7 with 10:32 remaining in the game.

The ensuing kick-off was the momentum swing in the game for the Tigers.

Freshman Narkavius Campbell fielded the kick and broke free, putting T.R. Miller in the red zone to start their first drive of the fourth quarter.

McMillan capped off the great starting field position with his second touchdown of the game, and quarterback Joshua Jolly took a quarterback keeper around the left end for a 2-point conversion that tied the game up at 15-15.

The Tigers defense came up with another big stop on fourth down, as the Jaguars turned the ball over on downs in their own territory.

McMillan and the Tigers offense pushed the ball into the red zone, before giving sophomore kicker Matthew Morgan the task of putting them ahead.

Morgan delivered in the clutch for the second straight week, kicking a 30-yard field goal through the uprights to give the Tigers their first lead of the second half with 5:26 left to play, 18-15.

The Jaguars threatened to end the Tigers perfect season on their last drive, marching down the field to find themselves on the T.R. Miller 9-yard line with six seconds on the clock.

A last chance heave landed in the hands of Tigers’ junior defensive back Hunter Johnson in the end zone as the clock hit zero, moving T.R. Miller to 4-0 on the year.

The interception was Johnson’s second of the game, and T.R. Miller head coach Andrew Thomas was pleased with the young man’s performance.

“They tried to pick on him all game,” Thomas said. “He made big tackles and plays throughout the game. It was only his fourth game starting at the varsity level, and he’s getting more comfortable with the experience, as are a lot of our young defensive players.”

Thomas was happy with the way the team played, but feels there is room for improvement.

“We haven’t played our best but we are finding ways to win,” Thomas said. “This shows that our ceiling is higher than this if we can win while we don’t execute the way we would like.”

McMillan continued his strong start to the season, leading the game in rushing with 136 yards on 17 carries, and finding paydirt two more times to give him 12 touchdowns on the season.

The undefeated Tigers look ahead now to the Mobile Christian Leopards, who are also defeated in 3A competition.

T.R. Miller will travel to Mobile Christian Friday night, where Thomas looks to have the team prepared through a strong week of practice.

“We know how to win, and we never give up on ourselves,” Thomas said. “We have to be able to execute on offense, defense and special teams. Hopefully, we can focus throughout the week and be ready for the game.”