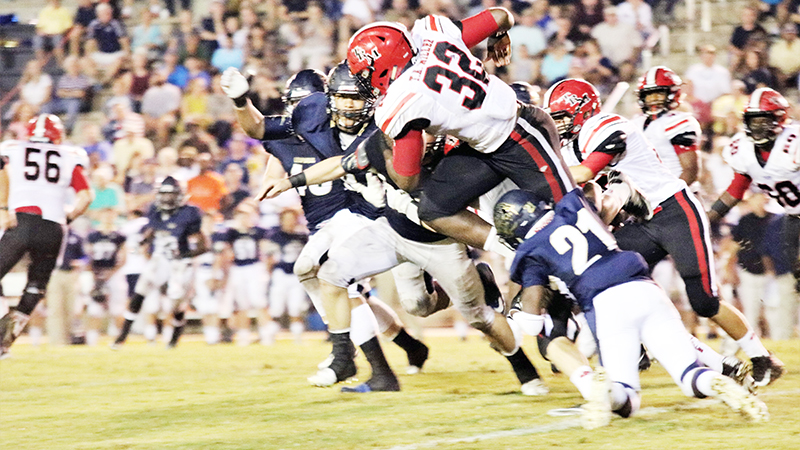 Michael Campbell busts through the line on a run. Allison Terrell | Courtesy Photo

An aerial assault by the No. 1 ranked Leopards would be the eventual demise of the No. 6 T.R. Miller Tigers last Friday. A five-touchdown performance by the Leopard’s quarterback Alex Moore was too much for the Tigers, who picked up their first loss of the year, 35-21.

Things looked promising for TRM as they got on the board first, when DeMarquis McMillan punched in a 2-yard touchdown late in the first quarter to give the Tigers a 7-0 lead after a Matthew Morgan PAT.

That lead would not hold long, as Mobile Christian marched down the field on its ensuing drive for Moore’s first touchdown, a 3-yard dump off that found paydirt to knot the game up, 7-7 with 11:10 seconds last in the first half.

Tiger’s quarterback Joshua Jolly gave the Tigers the lead back a couple of plays later, busting free on a 60-yard run that would push TRM back in front, 14-7 after another successful Morgan extra point.

Moore and the Leopards answered back with a long touchdown of their own, a 48-yard pass to Eric Poellnitz. A missed PAT kept the Tigers in the lead, though, with 6:47 remaining.

The Tigers had a chance to extend the lead late in the second quarter, but a missed 32-yard field goal would keep the score at bay, heading into halftime.

The third quarter was all Mobile Christian’s, where they outscored the Tigers 22-0.

Head coach Andrew Thomas felt that the third quarter was lost because of missed opportunities.

“We had our chances there in the third quarter to tie the game up, but we turned the ball over at crucial times,” Thomas said.

Mobile Christian struck first on another connection between Moore and Poellnitz, an 18-yard screen pass. The Leopards converted a two-point conversion to give them a 21-14 lead with 10 minutes remaining in the third.

A costly fumble cost the Tigers a chance to tie the game up, and in turn, led to a 55-yard touchdown pass from Moore, extending the lead to 28-14 with 1:32 left in the third.

Another lost Tiger possession allowed Moore to connect with Poellnitz on an 86-yard screen pass that would give the Leopards a 35-14 lead heading into the fourth quarter.

A late 3-yard touchdown run by McMillan and a Morgan extra point wouldn’t be enough for a comeback, as the scoreboard read 35-21 as the clock struck zeroes.

Thomas didn’t feel that the score represented the way his team played.

“We played the type of game we needed to, I thought,” Thomas said. “The turnovers hurt us and the game got away there in the third. If we execute a couple times there in the third I think the outcome is a little different. We played a good team; we just got big-played.”

The Tigers will look to bounce back this week as they take on class 4A Tallassee at Brewton Municipal Stadium Friday night.

Golf course to be rezoned?