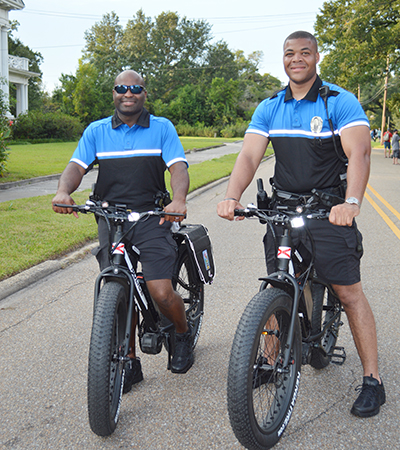 Brewton Police Department is now riding in style, in what they believe will help them get more in touch with the public.

The BPD recently purchased two bicycles that local police are riding around on during public events.

So far, the officers have taken the new bikes out during Porchfest and during the high school football games, and it has helped them reach out to the public much easier, Brewton Police officer Madison said.

“It has helped us get in touch with the neighborhood,” Madison said. “Police cars can make people nervous. This is a much simpler way to get out with the people during the local events.”

Only two bicycles were purchased, and being the new, hot commodity among the BPD, officers are taking turns riding them at local events.

“When they released the announcement that we were getting bikes, a few of us signed up,” Madison said. “They selected a few of us to go in rotation for certain events.”

Madison did not take a preference to the bicycle or being in a squad car.

“It really depends on the weather,” Madison said. “We had to ride home on the bikes in the rain one night. I’d rather be in a car then. I personally feel like this is a great thing, though. We are excited about mixing up with the public.”