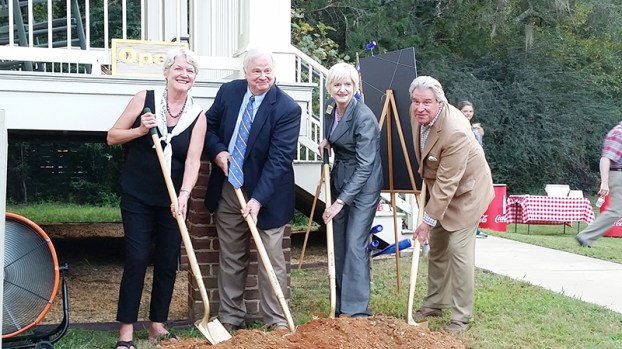 The Cahaba Foundation, the Alabama Historical Commission, and the Cahawba Advisory Committee in partnership with Selma and Dallas County Chamber and Tourism Information broke ground for a new gated entrance to Old Cahawba Archaeological Park near Orrville on Mon., Sept. 25 at 5:30 p.m.

The event was held at the entrance of Old Cahawba, a historic property of the Alabama Historical Commission. Afterwards a multitude of local and statewide guests joined city and park officials to enjoy a “Taste and Toast” reception featuring specialty selections donated by some of the area’s favorite restaurants.

A bronze plaque commemorating the Park’s major donors was also unveiled inside the visitor’s center.

“This is a great day for Old Cahawba, a great day for Dallas County, a great day for the state of Alabama and the fulfillment of a dream for The Cahaba Foundation, said Florence Young, president of The Cahaba Foundation. “Established in 2008 by the late Daniel J. Meador, the mission of our non-profit foundation has been to protect and preserve the site of Alabama’s first state capital and now we are celebrating the completion of this first priority. It is only through a viable public/private partnership with the Alabama Historical Commission and the Cahawba Advisory Committee, the financial investment of corporate and charitable foundations, as well as from the generosity of hundreds of Alabamians across the state, that The Cahaba Foundation is able to celebrate the construction of this grand and secure entrance to the Old Cahawba Archaeological Park.”

The gated entrance will secure entry into the park afterhours. This project marks a significant milestone for the park’s ongoing capital campaign. To date, the campaign, which was launched in 2008, has raised over $1,000,000, allowing the park to purchase those lots held in private ownership for the state, ensuring that they will be restored and preserved for archaeological study and public education and enjoyment.

“This is a perfect example of a successful public-private partnership,” said Lisa D. Jones, executive director of the Alabama Historical Commission. “The commission is grateful for the efforts of both The Cahaba Foundation and the Cahawba Advisory Committee. Our ongoing partnership has resulted in a major land acquisition, which helps support our mission ‘to protect, preserve, and interpret Alabama’s historic places.’”

Old Cahawba’s new entrance is made possible through the generous contributions of corporations, charitable foundations and individuals across Alabama. Most recently, funding made available from the Ala-Tom Resource, Conservation and Development board has insured the completion of the construction and landscaping of this project in time to celebrate Alabama’s Bicentennial and Old Cahawba’s 200th birthday.

“We are proud that so much of Alabama’s rich heritage is located right here in Dallas County,” said Sheryl Smedley, executive director of the Selma and Dallas County Chamber of Commerce and Tourism Information. “This is a great opportunity to celebrate some of Alabama’s earliest history and to showcase local businesses.”

Old Cahawba Archaeological Park, a historic property of the Alabama Historical Commission, is located at the confluence of the Cahaba and Alabama Rivers and is one of the most significant historical and biological sites in Alabama.

Although best known as Alabama’s first state capital from 1819 to 1826, Old Cahawba embraces a long history of multi-cultural inhabitants and settlements.

and is highly prized for its archaeological and historical merit. It was the home of some of Alabama’s earliest inhabitants (16th century Native Americans known as the “Mississippians”), a thriving antebellum river town (one of the wealthiest towns in the country at the time), a Civil War military prison and a key post-Civil War site for the Radical Republican Party as the old deserted court house became a rallying point for freed slaves attempting to solidify the political gains they had secured during Reconstruction.

Thousands of visitors of all ages tour Old Cahawba each year, including locals who come to walk and ride bikes along the nature trails. School children from throughout the state and tourists from across the country are frequent visitors.