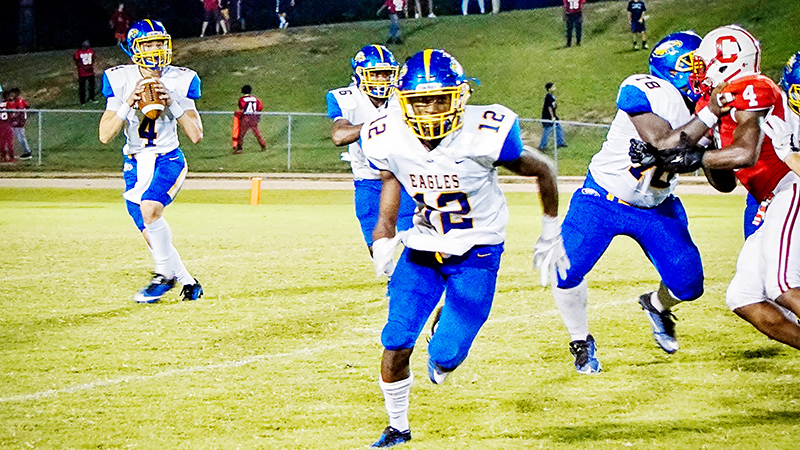 The W.S. Neal Eagles put up a valiant fight against undefeated 5A Carroll High School (Ozark, AL) in a non-region game on the road, but in the end, fell to the CHS Eagles 26-13. The loss moves Neal to 2-3 on the season.

Neal’s defense made a strong showing, holding a tough Carroll team to a total of 206 yards of offense for the night, the fewest yards CHS has gained on a team all year.

Head Coach Andro Williams said he felt like his defense played well, but some mistakes hurt them in the end. “Defensively, we did a great job,” Williams said. “I thought the numbers game caught up with us tonight, but we’ve got to learn how to finish. We’ve got to learn how to start and finish our battles. I thought we found ourselves late,” he continued. “We missed some assignments here and there, but I’m proud of our guys.”

Neal kicked off to Carroll to begin the first series of the game, and forced a three and out immediately, but the refs called a fumble on Neal’s fair catch off the punt, and the Carroll Eagles were able to maintain their drive. Six plays later, Carroll was in a fourth down and six situation. They went for it, and quarterback Trey Buchanan’s pass fell incomplete, but their drive was kept alive when a penalty flag was thrown on Neal, once more.  Two runs later, Carroll scored on a 13-yard pass, going up 7-0 with 6:30 on the clock in the first quarter.

A 15-yard pass completion from junior Matt Thomas to senior Christian Wood gave Neal a good start on its second possession, but they weren’t quite able to get into the red zone before having to punt the ball away.

With 14 seconds left in the first quarter, a Carroll defender was able to get a hand on the punt, and CHS ran it back 30 yards for their second score of the night, increasing their lead to 14-0 to end the quarter.

Three downs and a punt later, Neal’s defense was back on the field, getting a three and out from Carroll once more, but when CHS’s punter fumbled the snap, a Neal defender was flagged for a late hit, and the Carroll Eagles kept the ball. Twelve plays later, facing a fourth and goal from the three yard-line, Carroll settled for a field goal, taking a 17-0 lead with 2:55 left to play in the half.

The Neal Eagles drove down the field, running two minutes off the clock before scoring on a 47-yard pass from Thomas to senior Jacoby Hawthorne. Carroll had time for two plays before the buzzer sounded ending the half. The teams headed to the locker room with the Carroll Eagles leading the Neal Eagles 17-6, even though Neal had gained 100 yards of offense (21 rushing and 79 passing) while holding Carroll to only 80 yards offensively (64 rushing and 13 passing).

Senior Marvin Maddox started the second half with a big kickoff return, but it was called back because of a penalty. Five minutes later, and despite two big pass completions by Thomas, the Eagles turned the ball over on downs on their own 39 yard line. Carroll’s offense drove 36 yards before senior Matt Hutchins took the ball from them on a third and goal from the Neal three-yard line, and ran deep into Carroll territory before referees stopped the play, and called the ball dead, saying the Carroll runner was down before the ball came out. On a fourth and goal from the six yard-line, Carroll increased its lead to 20-6 with another field goal with 2:36 on the clock in the third quarter.

The Blue Eagles turned the ball over on downs four snaps later, allowing Carroll to score once more with a 33-yard touchdown run by Jonathan Fells.

Maddox got the Eagles to Carroll’s 5 yard line with a 75-yard kickoff return. Four plays later, Maddox pushed across the goal line on a one-yard touchdown run. Senior Tommaso Bartolucci’s PAT was good, and Neal closed the gap to 26-13 with 11:13 to play in the game. In a huge move, freshman Isaac Bonam managed to come up with an on-side kick, keeping his team in the game. The Blue Eagles’ momentum was stopped when a fumble on the 5-yard line was recovered by a CHS defender.

Hawthorne led Neal’s receivers with 63 yards and a touchdown.

Coach Williams said, “I’m proud of our kids. Proud of their effort. We made some mistakes tonight that kind of hurt us in the first half. I thought that our coaches did a great job of adjusting to what we were getting.

“We talked about playing in all three phases of the game,” he said, “and I thought we lost the special teams battle tonight. We can’t let them get a score on a punt. A punt has to be a positive play for us. We talked about that. Again, I’m real proud of our kids. We’ll continue to work and go from there.”

W.S. Neal will face off against Monroe County High School Friday night at home. Kickoff is at 7 p.m.