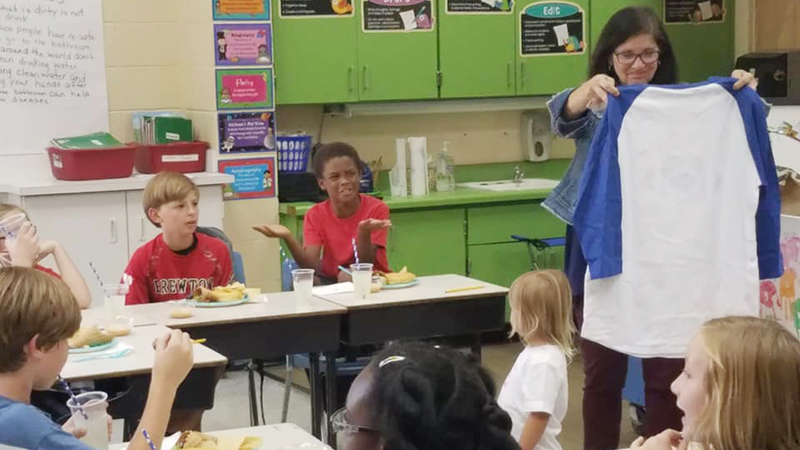 After teaching school for the past 25 years, most people would be thinking about slowing down and spending less time in the hectic world of education.

Debbie Stokes is not most people. In many ways she is just getting started as she transitions into her new position in the administrative office of Escambia County in general and as the assistant principal at W.S. Neal Elementary grade in particular.

“I have had my master’s degree in administration for more than three years, but never thought too much about using it,” Stokes said. “This just sort of fell into my l lap and I knew it was the right move for me.

“I am first and foremost a teacher,” she added. “I think like a teacher and I think that will come in handy with this new job.”

From the time she began teaching, she said it wasn’t so much that she wanted to be teaching, but it was something she could do and still be with her family as much as she wanted.

“A teacher has the ability of having somewhatthe same hours as the students,” she said. “I felt like I could work and still be able to spend time with my children as they grew up. Well, those years are over. My children are all grown and live away from Brewton, so now I have time to get into something new. I have to be working at something. I have never been the kind of person to want to just get by with my job. I take it seriously and I feel like God has made this way for me and I am ready for it.

Stokes grew up in Mobile and attended Murphy High School. She graduated from Murphy in 1977 and met her husband, David Stokes, while they were in college at the University of Alabama. They were married in 1981 and moved to Brewton where his parents lived and the rest, as they say, is history.

“I continued my education while my children were little,” she said. “It wasn’t easy and, many times it was very hard, but I am the sort of person who has to keep busy. When they started to school, I worked the same hours they were in school, so that helped. But as long as I feel like God is keeping me healthy, I am ready for a new adventure.

“It’s not going to be easy to say goodbye to my fellow teachers and students because they are all so close to me. But I already know many of the people at Neal and it won’t be like going somewhere for the first time.”

She said there had been some years when she was commuting to Auburn University at Montgomery that she had some hard times, but it all seemed to work out for the best. Her goal was to have her first child be ready for kindergarten by the time she started teaching.

“It was a lot of long hours and work, but it has all been worth it,” she said. “I am not the type to retire as long as I have good health, so now I am just trying something new.”

She and David have three children, David, Elizabeth Ann and Rob. David and his wife, Courtney, have a little boy named Tripp. They, and Elizabeth Ann are all working in education and the youngest son, Rob, is following his dad’s footsteps.

“I will never forget what teaching is all about,” Stokes said. “I think that will serve me well to remember as I enter into this new position.”