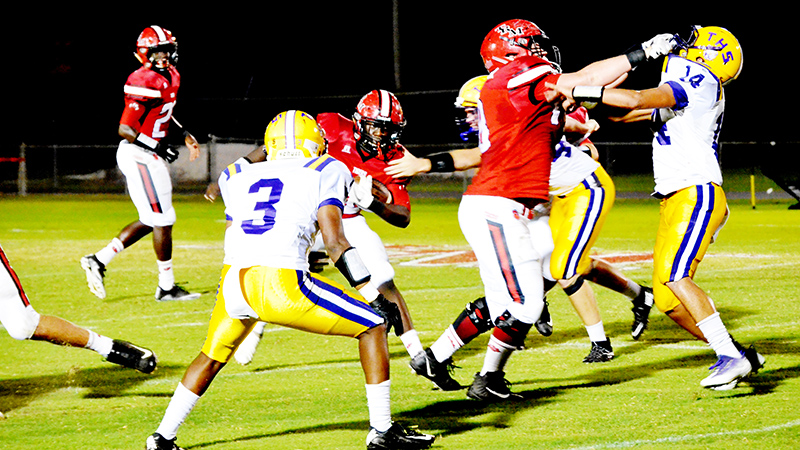 The run game was a bright spot again for TRM; including McMillan, Campbell and Jolly. Travis Tessandori| The Brewton Standard

It was a tale of two halves for both T.R. Miller High School and Tallassee High School when they squared off Friday in Brewton. Ultimately, three onside kick recoveries for Tallassee in the second half would highlight a huge comeback. Trailing by 22 at one point, Tallassee flipped the script and pulled out a 33-29, road victory.

After both teams swapped punts on their first drives of the game, Tallassee would get on the board first.

A big run by Trent Cochran-gill set Tallassee up for a 23-yard touchdown pass from Casey Baynes to Kalvin Levett. Quinton Jeter tacked on the extra point to give Tallassee a 7-0 lead late in the first quarter.

TRM answered back with a big drive of its own, capped off by a 1-yard draw to Demarquis McMillan that found paydirt. A missed PAT left Tallassee in the lead, 7-6.

This was the beginning to 29 unanswered TRM points.

A Tallassee three-and-out led to a punt that placed TRM at its own 39-yard line. It only took one play to find the end zone, as quarterback Joshua Jolly went around the left end and found space for a 61-yard touchdown. TRM would convert a two-point conversion to go up 14-7 halfway through the second quarter.

TRM got the ball back, but was forced to punt. The punt was muffed by Baynes and recovered by TRM’s Orlando Gandy at Tallassee’s 39-yard line.

Michael Campbell took the first play from the 39 to the end zone. Another two-point conversion gave Miller a 22-7 lead heading into halftime.

TRM would ride that momentum into the third quarter, scoring on its first drive after a third and 16 turned into a 77-yard touchdown run for McMillan, his second score of the game. The extra point made it 29-7, TRM with 10 minutes left in the third quarter.

Tallassee needed to find a way to turn the game around, and Baynes stepped up in a big way to do just that.

Tallassee’s Jalen Johnson returned the ensuing kickoff 55 yards to the TRM 35-yard line. A fourth down conversion and a third-and-long conversion led to a 26-yard bullet from Baynes to Cochran-gill that found the mark for a touchdown. The extra point was good, 29-14 TRM with 4:20 remaining in the third quarter.

Tallassee would then recover an onside kick on the TRM 39. Not long after, Baynes took a quarterback keeper around left end for his third touchdown of the game. The TRM lead was cut to 29-20 after the PAT was blocked by Gandy.

Tallassee lined up for another onside kick, and again recovered. This drive ended in a punt.

Possibly the play of the game came on the ensuing TRM drive, when Tallassee forced a fumble on fourth and three and recovered the ball at the TRM 37 with 8:09 left in the fourth quarter.

A few plays later, Baynes connected with Levett for the second time, this one a 19-yard touchdown. The extra point trimmed the Miller lead to 29-27 with 7:08 left in the game.

A sneaky onside kick by Tallassee caught TRM off-guard and was again recovered by Tallassee, this time at the 50-yard line.

A quick Tallassee attack set up a 7-yard touchdown run by Markevious Mathews, and gave his team the lead, 33-29 after a failed two-point conversion.

The teams swapped punts, which set up the TRM offense with 1:51 remaining to try and win the game.

Miller chipped away, getting catches from Ricky Samuel and Matt Smith and a horse-collar call that set up the final play of the game at Tallassee’s 11-yard line.

With eight seconds left, Jolly dropped back to pass. Pressure forced him to roll around to the right side as he heaved a pass into the end zone, which was broken up by Baynes as time expired.

The 33-29 final marked the first time Tallassee has defeated TRM in the team’s seven meetings.

Jolly finished the game with 157 yards from scrimmage with a touchdown. McMillan and Campbell combined for 193 and three touchdowns out of the backfield.

TRM outgained Tallassee by 68 yards, but time of possession in the second half was the difference, Thomas said.

“We couldn’t get our defense off the field,” head coach Andrew Thomas said. “We fought to the end, and even had a chance to win the game on the last play. We have got to keep playing, though. A couple things went wrong and it snowballed. It was a heartbreaker, but we can’t dwell. We are getting back to work.”

T.R. Miller drops to 3-2 on the year and will host Excel High School on Friday.